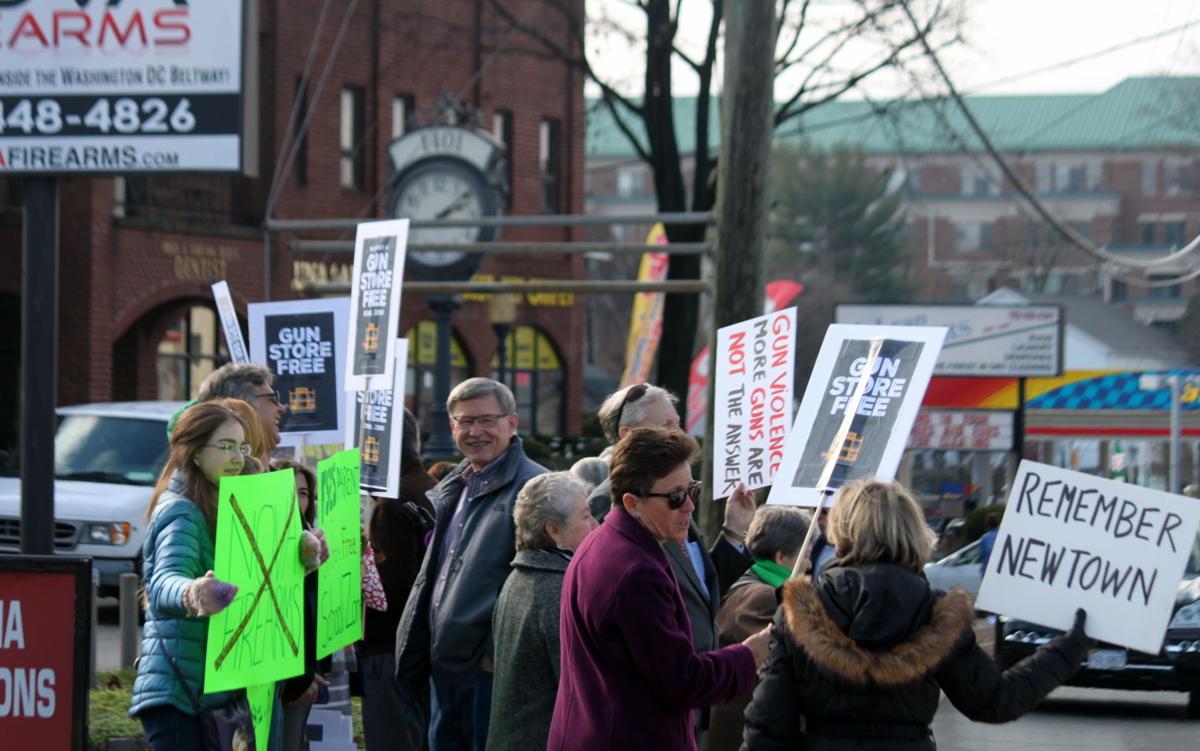 Dranesville District Supervisor John W. Foust (middle) visits with protestors as they gather outside Nova Firearms in McLean to show their support for new legislation that would give cities the right to establish gun store-free zones around schools. 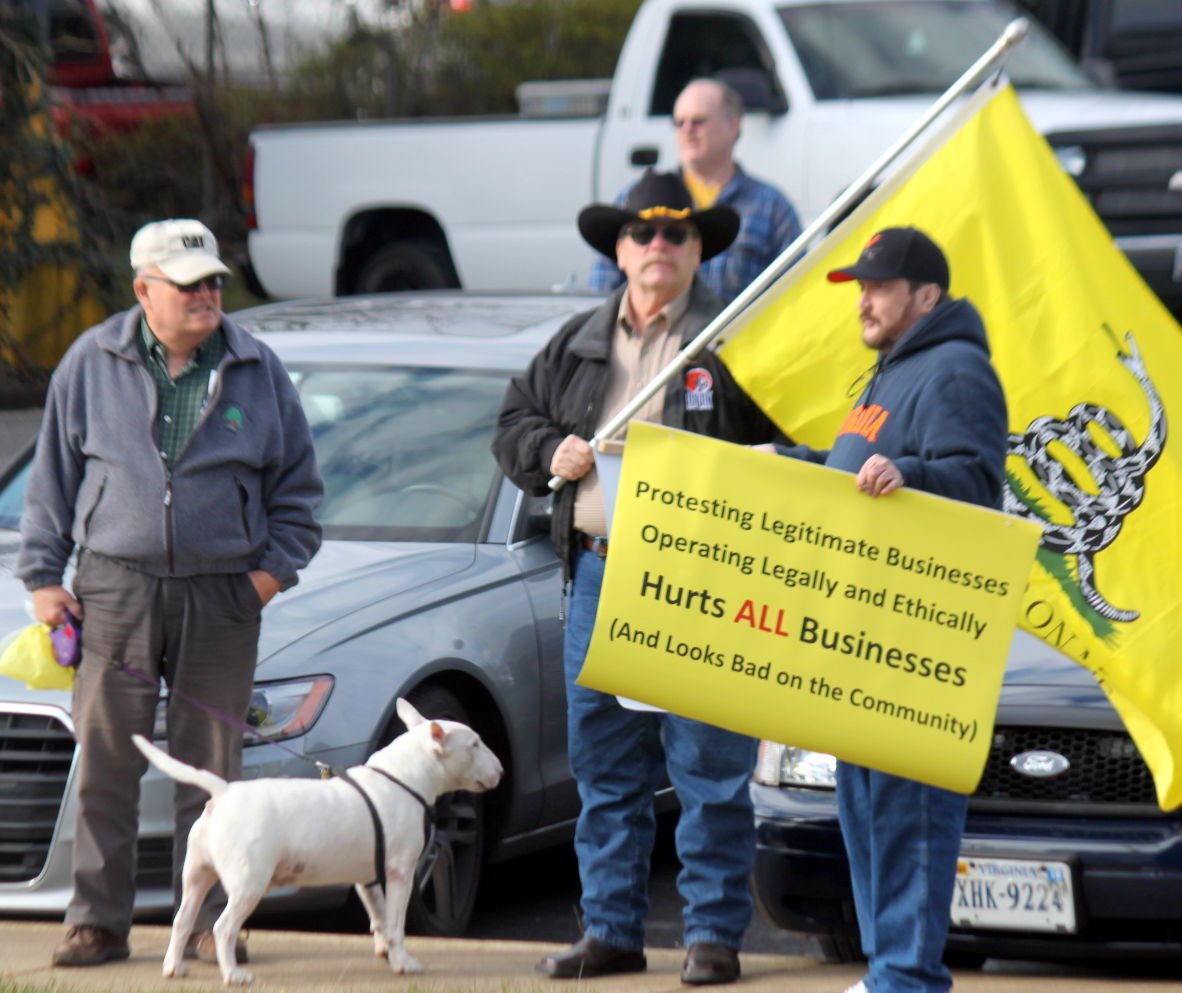 Counter-protestors showed their support for the Nova Firearms gun store in McLean, citing the Second Amendment and the owners' right to run a private business.

Dranesville District Supervisor John W. Foust (middle) visits with protestors as they gather outside Nova Firearms in McLean to show their support for new legislation that would give cities the right to establish gun store-free zones around schools.

Counter-protestors showed their support for the Nova Firearms gun store in McLean, citing the Second Amendment and the owners' right to run a private business.

A firearms store in McLean has become the focal point of a debate over guns that has embroiled Fairfax County for months and even reached the halls of the Virginia State Capitol in Richmond just before the General Assembly convened Jan. 13.

In the latest chapter of this ongoing saga, many local protestors assembled outside the store on Jan. 16 to express their support for newly-submitted legislation that would give localities the power to create gun-store-free zones around schools.

“We wanted this rally to show community support for the legislation and our legislators in Richmond,” said McLean resident Vance Gore, who helped organize the rally.

“We’re not against gun stores. We’re against gun stores next to a school,” Gore, a parent of two Franklin Sherman students, said of the approximately 50 protestors clustered on the sidewalk in front of Nova Firearms. “We believe it makes a very dangerous situation for the community. We have people with guns now moving around the school. We don’t know who they are or what they want.”

House Bill 422, sponsored by Delegates Kathleen Murphy (D-34) and Marcus Simon (D-53), and Senate Bill 138, sponsored by Senator Barbara Favola (D-31), would give localities the option of “regulating or prohibiting anyone from engaging in the business of selling firearms at retail within 1,000 feet of a school”, according to the summary on Virginia’s online legislative information system.

Filed on Dec. 29 before the previous legislative session adjourned, SB 138 was referred to the senate’s committee for courts of justice, while HB 422 was submitted on Jan. 7 and is currently being considered by the House of Delegate’s committee on militia, police and public safety.

Gore is the head of the Parent-Teacher Association at Franklin Sherman Elementary School, which sits behind Nova Firearms’ Chain Bridge Road lot. Nova Firearms sparked controversy in McLean last September after the store moved from a location near the town’s post office on Elm Street to its current space next to the school.

Originally located in Falls Church, Nova Firearms relocated to McLean in 2013. Its building on Elm Street, which intersects with Chain Bridge Road, was a few blocks away from Franklin Sherman Elementary School, and the Falls Church Times reported at the time that the store had no exterior signs marking its presence.

According to an article in The Connection, Nova Firearms owner James Gates moved the store to its new Chain Bridge Road location because the venue was larger, and he hoped to use the extra room to offer firearm safety classes.

“I understand that we share a backyard with the elementary school,” Gates told The Connection. “If I could have avoided that, I would have.”

The store’s Sept. 26 opening attracted scores of politicians, including Murphy, Favola, Simon, Supervisor John Foust (D-Dranesville), and other local and state representatives, many of whom were also present at the rally this past weekend.

Schools have been designated gun-free zones under the Gun-Free School Zones Act of 1990, a federal law that bans the possession and discharge of a firearm on school grounds or within 1,000 feet of a school. However, the act contains exceptions for people who are licensed to carry a firearm by the state or locality and for law enforcement officers, and the ban doesn’t apply when the firearm is unloaded and kept in a locked container.

Those who oppose Nova Firearms’ location argue that its proximity to the school creates a threatening environment that can endanger students’ safety and disrupt their ability to learn.

“It makes no sense,” Murphy said. “No one picketed or bothered this gun store when it was on Elm Street, and this is a slap in the face to this community that they care so little about us and our children that they would move a gun store right next to a grade school.”

Murphy has been a vocal advocate of stronger gun control measures, a personal issue for her since her brother was shot and killed at his workplace.

In addition to HB 422, the delegate is also a patron on bills that would require criminal background checks on buyers at gun shows and prohibit individuals on the federal Terrorist Screening Database from receiving concealed handgun permits. She is also involved on bills that would make the possession of firearms by people who have been convicted of misdemeanor sexual assault or have been served a protective order as a result of domestic violence Class 1 misdemeanors.

Those pieces of legislation are among more than 100 gun-related bills that the General Assembly will address during this 60-day session, according to The Washington Post. The prevalence of this particular issue drew hundreds of individuals both for and against gun control to Richmond on Monday for Lobby Day.

The other side of the gun store debate was also represented at the Nova Firearms rally as counter-protestors rallied to show their support for the store’s owners. They cited the Second Amendment and the owners’ right to run a private business.

“They’re obeying all federal, state and local laws,” said Arnoldo, a McLean resident who declined to provide his last name. “I’m not happy that they’re being harassed by a group of citizens who are unfairly targeting them and interfering with their business. That bothers me a lot.”

Arnoldo said that he lives down the road from Nova Firearms and has frequented the store since it moved to McLean.

The store’s supporters argued that the store’s proximity to Franklin Sherman Elementary School isn’t dangerous, pointing to recent school shootings as evidence that creating gun-free zones doesn’t prevent such tragedies from occurring. They also said that there are a lot of misconceptions about gun owners.

“I think the press has fostered a lot of false impressions about armed American citizens,” Fairfax resident Jeff MacConnell said. “They’ll very rarely report on cases where a good guy with a gun, whether he had to shoot it or not, stopped a crime from happening because he was armed.”

MacConnell also defended the National Rifle Association (NRA), which found itself at the center of debates over gun violence following incidents such as the 2015 shooting in San Bernardino, Calif.

“People say all they do is lobby. All they do is give money to politicians,” MacConnell said. “But go online and see how many courses they have for women and men to learn safe use of firearms.”

However, Murphy, Favola and the supporters of their gun store-free school zones legislation said that this particular bill is about public safety and giving local communities the power to decide if they want a gun store near a school, not gun-control.

“We’re not telling anybody to do anything, we’re not taking anybody’s guns, we’re not saying you can’t sell guns in McLean,” Delegate Richard C. Sullivan Jr. (D-48) said. “This gun store’s been here for years without any protest, without any problem, but moving it right next to a school frankly just defies common sense.”

The struggle over Nova Firearms is just one part of a larger local, state and national conversation about gun rights and control. The rally came not long after after President Obama announced a series of gun-related executive orders that reinforced federal regulations on background checks and gun safety on Jan. 5.

While Murphy and Favola’s legislation won’t solve all gun issues, perhaps one thing that both its supporters and its opponents could agree on Saturday morning was the need for discussion.