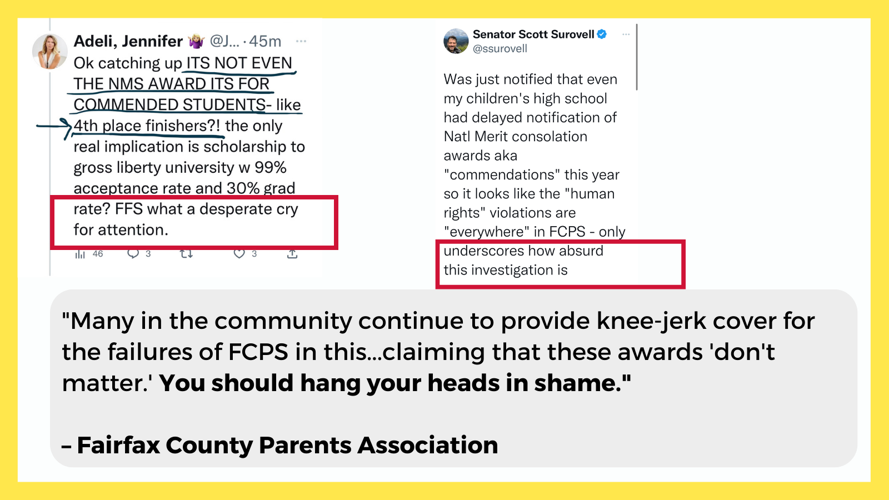 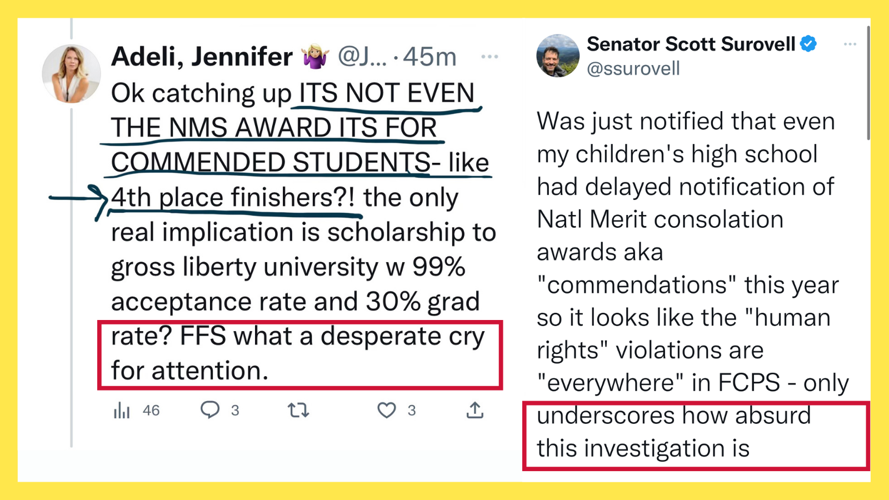 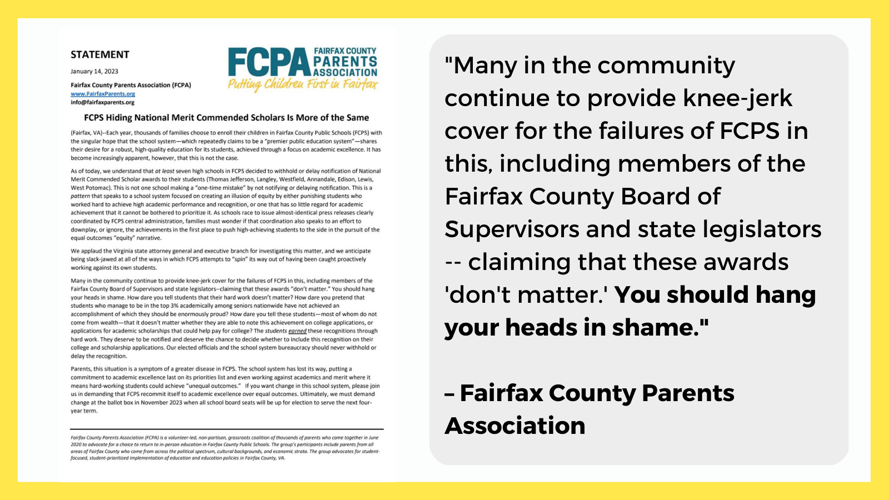 With four more school principals confessing they withheld National Merit awards from students, bringing the total to seven schools so far, the Fairfax County Parents Association sent the school district, state and local leaders a scathing letter, calling them out for saying that the awards “don’t matter.”

“You should hang your heads in shame,” the parents’ group, a nonpartisan volunteer grassroots organization, wrote in a letter published late Saturday morning.

The Fairfax-Falls Church Community Services Board is the local agency that provides services for people in Fairfax County and the cities of Fairfax and Falls Church who have mental illness, substance use disorders, and/or intellectual or developmental disabilities. The administrative board of which Adeli is part of  oversees the establishment and operation of these local services.

Taking a cue from these leaders, local activists disparaged parents and children raising concern with the withholding of the awards, saying they were chasing a “fake news story” with “Faux outrage” and an “absurd accusation of bias” by Fairfax County Public Schools.

In its letter, the parents’ group asked state and local leaders, “How dare you tell students that their hard work doesn't matter? How dare you pretend that students who manage to be in the top 3% academically among seniors nationwide have not achieved an accomplishment of which they should be enormously proud? How dare you tell these students – most of whom do not come from wealth – that it doesn't matter whether they are able to note this achievement on college applications, or applications for academic scholarships that could help pay for college?”

Most of the country has been outraged after the story broke on Dec. 21, documenting that Ann Bonitatibus, the school principal at Thomas Jefferson High School for Science and Technology (TJHSST), didn’t tell students they had earned important National Merit Commended Student awards until weeks after deadlines had passed for early admissions and scholarships, costing students opportunities. Commended Students are among the top 3 percent of 1.5 million students who take the PSAT/NMSQT test in their junior years, and the honor opens the door to admissions, scholarships and other opportunities.

However, in the three weeks since the controversy has roiled the community, a band of politicians and activists in Virginia have dismissed the scandal.

Earlier this week, on Jan. 9, after Langley High School and Westfield High School principals admitted withholding the awards, Adeli, wrote on Twitter, “Ok catching up ITS NOT EVEN THE NMS [National Merit Scholarship] AWARD ITS FOR COMMENDED STUDENTS- like 4th place finishers?! The only real implication is scholarship to gross liberty university w [with] 99% acceptance rate and 30% grad rate? FFS [For F*#ks Sake] what a desperate cry for attention.”

Adeli is featured on the Fairfax County Democratic Committee website. In another tweet on Jan. 9, she also claimed that “there are zero real world implications to a delayed distribution, certainly nothing that should garner this attention.”

By Friday night, as four more principals announced withholding the award, including at his children’s high school, Surovell doubled-down and called  the investigation “absurd” in a tweet.

“Student success should be celebrated, not hidden. The fact that Fairfax County Public Schools  purposefully withheld commendations that could alter the trajectory of students’ futures is unconscionable,” said Christy Hudson, a local mother and board member of the Fairfax County Parents Association. “Parents assume principals and school administrators have their children’s best interests at heart, and this clearly proves otherwise. What the school district has done is shameful.”

According to an analysis done by the Fairfax County Times, the Commended Student award gives students an automatic four-year scholarship at Liberty University in Lynchburg,  worth about $100,000 today. It also qualifies students for 800 Special Scholarships managed by the National Merit Scholarship Corporation. Most National Merit Commended Students have just narrowly missed –  sometimes just by one question – becoming National Merit Semifinalists, which qualify students for more scholarships. So, knowing they have achieved the honor of being Commended Students not only opens the door to financial benefits but it’s a clear signal to admissions counselors and employers that these students are among the most academically advanced students in the nation. What’s more, families can leverage financial aid packages at one university to negotiate better packages at other schools.

“The students earned these recognitions through hard work. They deserve to be notified and deserve the chance to decide whether to include this recognition on their college and scholarship applications,” the Fairfax County Parents Association said in its letter. “Our elected officials and the school system bureaucracy should never withhold or delay the recognition.”

Early on, Fairfax County Public Schools Superintendent Michelle Reid called the withholding of awards as a “one-time” problem that was the result of “human error.” It launched a local #SaveMerit campaign, and the Fairfax County Parents Association didn’t buy Reid’s response.

“This is not one school making a ‘one-time mistake’ by not notifying or delaying notification,” the group said in its letter. “This is a pattern that speaks to a school system focused on creating an illusion of equity by either punishing students who worked hard to achieve high academic performance and recognition, or one that has so little regard for academic achievement that it cannot be bothered to prioritize it. As schools race to issue almost-identical press releases clearly coordinated by FCPS central administration, families must wonder if that coordination also speaks to an effort to downplay, or ignore, the achievements in the first place to push high-achieving students to the side in the pursuit of the equal outcomes ‘equity’ narrative.”

As reported, the school district and local agencies have spent at least $513,500 on two controversial contracts with proponents of policies that parents groups and community members allege lead to the kind of discrimination alleged in the withholding of the National Merit awards. Since August 2020, Fairfax County Public Schools, the Reston Community Center and the Fairfax County Public Library have spent $58,500 for three hours and 40 minutes of talks, most of them virtual, with author Ibram X. Kendi, who has written, “The only remedy to past discrimination is present discrimination.”

Then, this fall, the school superintendent, Reid, signed a contract to pay a friend and consultant, Mutiu Fagabayi, founder of Performance Fact Inc., a firm based in California, $455,000 to chart the school district’s strategy. Fagabayi has advised school districts they must be “purposefully unequal” to achieve “equal outcomes for every student, without exception.” Reid had hired Fagabayi at her previous school district in Washington state.

“We applaud the Virginia state attorney general and executive branch for investigating this matter, and we anticipate being slack-jawed at all of the ways in which FCPS attempts to ‘spin’ its way out of having been caught proactively working against its own students,” the Fairfax County Parents Association noted.

In a warning to local parents, the group said, “Parents, this situation is a symptom of a greater disease in FCPS. The school system has lost its way, putting a commitment to academic excellence last on its priorities list and even working against academics and merit where it means hard-working students could achieve unequal outcomes.”

The parents’ group set its eyes on school board elections later this year, which will decide all 12 seats on the board, saying, “If you want change in this school system, please join us in demanding that FCPS recommit itself to academic excellence over equal outcomes. Ultimately, we must demand change at the ballot box in November 2023 when all school board seats will be up for election to serve the next four­-year term.”

And this lady Adeli? Wow, how does such a hateful person get elected?

Michelle Reid , isn’t she from the far left city of Seattle? Good luck to those students who work hard your spot in society will be diminished through idealism

Do you know her personally? You would be surprised about your biased assumptions. Focus on students!

Asra, it's time you stop these attacks. You've taken it too far. Watching your latest stunt at the school bard meeting is a clear sign that you write to harm and for personal gains. We know you are into politics, but your personal crusade is causing harm. The last paragraph go this "article" is a clear indication that this is all about politics. The majority of the Fairfax community does NOT support your stunts.

Gee……following Democratic reasoning, show me the statistics supporting your claim that the majority of the Fairfax Community does not support the questioning of the actions of the FCSB…thank goodness my kids are grown and through the Fairfax County school system…..all this equity BS is taking away from the true priorities of educating the kids to be successful in life and recognizing achievement when it happens. I would say vote the whole board out but since most lean heavily to the left politically and NOVA has become a beacon for whole politics, I doubt that will happen.

The "attacks" are really just reporting of facts. If you support discriminating against young children based upon the color of their skin, and what they do or dont do with that thing between your legs, you should say so and stop attacking the reporter for digging to get to the truth.