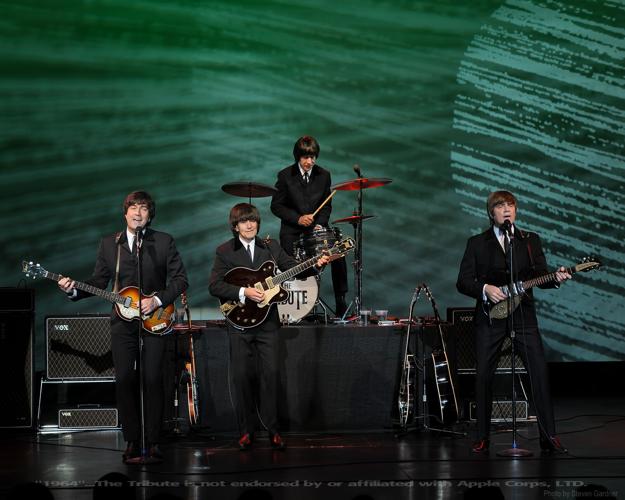 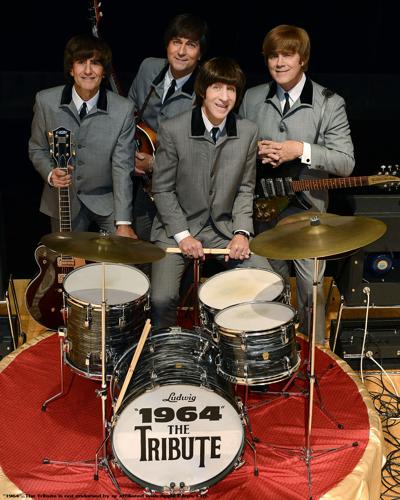 Authentic tribute live on stage at The Birchmere

Although The Beatles were already a sensation in England when they crossed the pond to perform on “The Ed Sullivan Show” on Feb. 9, 1964, their appearance changed music forever.

The Fab Four played three songs that night—“All My Loving,” “Till There Was You” and “She Loves You” and made millions of new fans overnight.

One of those who watched that night was Mark Benson, who today is a member of the authentic tribute band, 1964.

“Ed Sullivan was a school night and I had to be in bed by 8:30, so I only got to see half of their appearance,” he said. “That was my first exposure, and I, like many young men, thought, they didn’t go to college, are on the most popular television show in the world, the girls are screaming at them, so this looks like a really good job.”

Plus, Benson said, because The Beatles were in suits, it legitimized being in a band as a profession for many, and the seeds were planted for Benson to become a professional musician himself, learning guitar and drums—and Beatles songs were always part of his repertoire.

For almost four decades, 1964 has been wowing audiences and giving them a taste of that quintessential moment in history, when The Beatles actually played live in the U.S. for the first time.  With authentic costumes, hair, instruments, and sound, the group makes you feel as if you’re seeing The Beatles live.

“We put this band together in Akron, Ohio, thinking we would play a class reunion or maybe a club once a month,” said Benson, who performs as John Lennon. “Now, 38 years later, we’ve played Carnegie Hall 14 times, we’ve played Red Rocks Amphitheater every year since 2004, and I have a permanent pinch mark on my arm to make sure I’m not dreaming.”

Benson is joined on stage by Mac Ruffing as Paul McCartney, Tom Work as George Harrison, and Robert Potter as Ringo Starr.

“The idea behind the show is to show you what it was like if you were lucky enough to get a ticket to see The Beatles when they were on tour from 1963 to 1966, so it’s covering ‘Revolver’ and before,” Benson said. “The guitars, amps, and stage look are all designed to get the sound to be like it would have been then, though we have the benefits of monitors.”

When they first started, no company was making reissues of the instruments, so the band had to turn to the trades or make them themselves, which Benson did with the guitars he plays. Authenticity is vital to the performance.

“The guy who started the band and Mac, who plays Paul McCartney now, neither of them is left-handed, but they learned how to play left-handed just so the look is right,” Benson said.

The band plays the songs as close to note-to-note as possible, and won’t take liberties with the tunes, because they know people want to feel like they are seeing John, Paul, George, and Ringo, not Mark, Mac, Tom, and Robert.

“We have a chemistry on stage and lucky for us, we’ve had very few times over the last 38 years where we had to change members,” Benson said. “There’s a lot of Beatle tributes out there and more seem to pop up every day. Their music is just beloved.”

While it may seem corny, Benson feels the reason that the Fab Four’s tunes are so popular comes down to one word—“love.”

“Almost every one of their songs has the word or the concept of love in the song,” he said. “You see the word and hear it over 120 times in our night.”

One of his favorite things about performing as The Beatles is that the crowd is made up of different generations of people, with kids, their parents, grandparents, and in some cases, even their great-grandparents enjoying the music together.

“Even if they don’t consider themselves Beatles fans, they will know most of these songs,” Benson said. “We hear from promoters all the time that when people are leaving the show, they are really happy and in a good mood.”