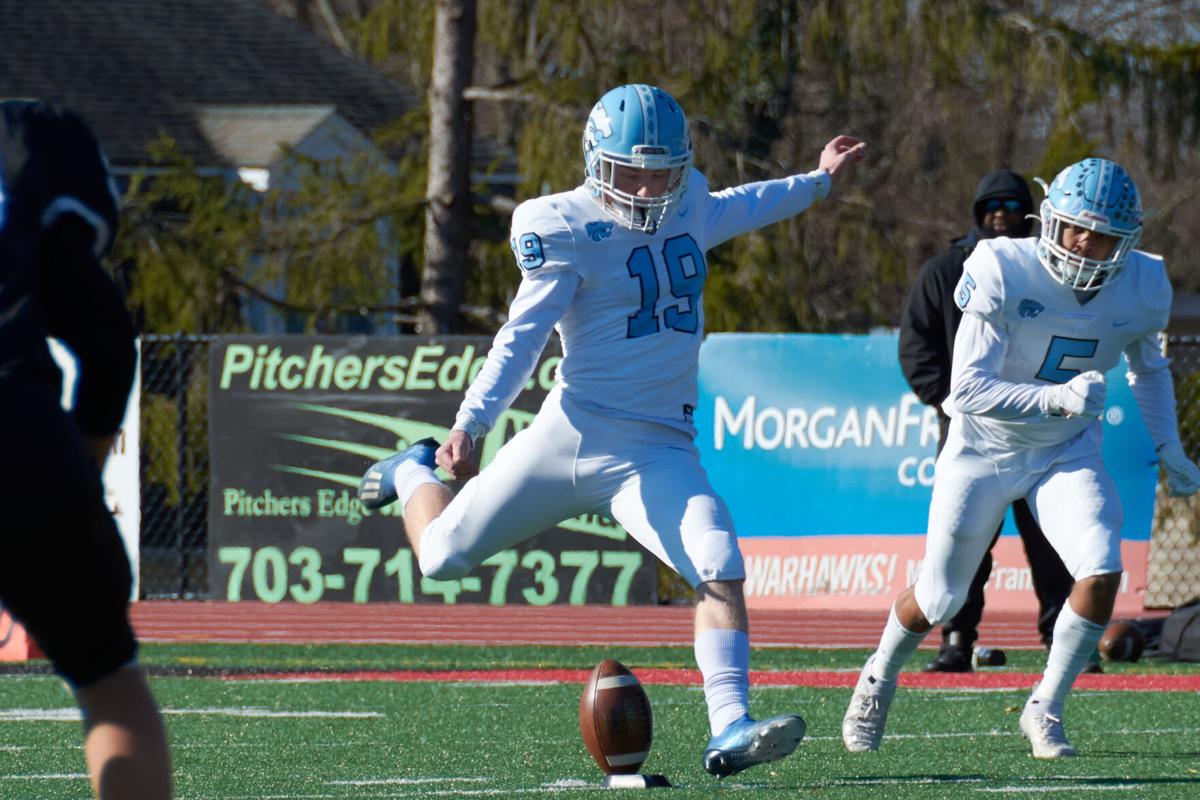 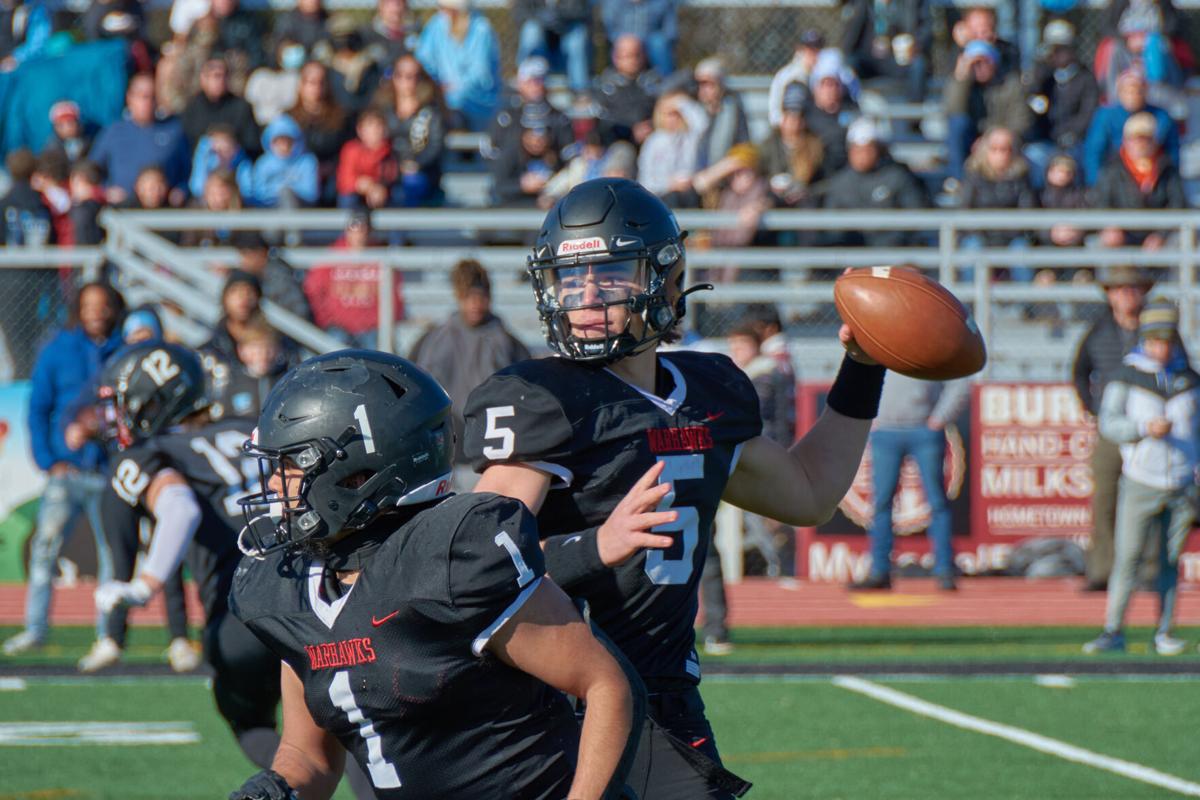 The last time the Madison Warhawks (12-1) and Centreville Wildcats (10-3) met, the Warhawks bested the Wildcats 21-17, but both teams left convinced they could play better. After letting the Wildcats back in the game in the fourth quarter following a 21-3 lead, it ended as Madison’s closest winning game all season, and the Wildcats were convinced another go could correct the record.

The two teams had their chance for a rematch November 27, and the Warhawks proved beyond a doubt they were the team to beat, handily defeating the Wildcats 35-7.

It was Madison’s fourth regional football title in school history, and the first time the Warhawks had won it back-to-back.

“It feels great. It’s never been done in Madison history,” Warhawks Running Back Alex Jreige said after the game. “It’s a new feeling for us. Last year was the first year we won the region since 2003.”

Throughout the fall, Jreige’s strong run game often served as the tip of the spear of Madison’s offense. In the regular season, Jreige had more than 1,300 rushing yards and 22 touchdowns under his belt.

As the season progressed, the Warhawks started to lean into their passing game as well, demonstrating that all options were on the table for their high-powered offense.

“I think it’s more of the way teams have been playing us and daring us to beat them with the pass,” said Madison Head Coach Justin Counts. Since the Warhawks successfully ran the ball, other teams “really had to pack the box, and we’ve had some match-ups on the outside that we could take advantage of, or at least one-on-one opportunities that we thought we had to take a shot at.”

An early play by the Warhawks set a leading example. On third down, Wide Receiver Darren Knicely reached over a Wildcat defender to pull in a 44-yard pass from Quarterback Connor Barry, setting up the Warhawks just outside the redzone. A few plays later, Jreige carried the ball to the right side, diving into the endzone for a score of 7-0.

The ball now with the Wildcats, Madison swiftly proved they could dominate both sides of play. The Wildcats were only able to pick up a first down on their fourth drive, and their sole touchdown came late in the fourth quarter. Throughout the game, the Warhawks kept the Wildcats to less than 140 yards.

After holding Centreville to a punt, the Warhawks quickly reached the end zone once again. Barry lobbed a pass to Wide Receiver Sonny Endicott, who beat a defender to strut up the sideline for a 51-yard touchdown.

Just before halftime, Jreige carried for another touchdown, weaving through the right side for a nearly 25-yard run and a score of 21-0.

The Wildcats were down but not out after the first half, and they had a chance to turn the tide starting with the ball in the third quarter. But just as Centreville’s offense started to gain steam, an interception by Madison Defensive Back Michael Delgado shut them down.

Shortly thereafter, the Warhawks marched to the endzone for a score of 28-0, leaving little doubt about whether Madison would let Centreville back in the game.

For good measure, the Warhawks widened their lead after stopping Centreville once again. Wide Receiver Cord Yates dived to catch a pass from Barry, picking up a 37-yard completion for Madison. On a steady drive to the end zone, Jreige capped it off with his third touchdown of the game for a score of 35-0.

Halfway through the fourth quarter, Centreville offered their only reply. Ragland fought through defenders to carry the ball up the left sideline, punching it on the next play for a final score of 35-7.

After the game, Centreville Head Coach Jon Shields reflected on a disappointing end to a strong season for the Wildcats. “I’m proud that we got here,” Shields said. “Congrats to Madison. They outplayed us and deserved to win.”

Looking forward, Centreville has a deep bench: only a handful of starters are graduating, leaving ample room for the team to grow next season. “They’ve built a foundation,” Shields said of the graduating seniors. “We’ve got to find a way to keep this in our distant memory. Team chemistry is everything. You can have playmakers, but if you don’t have chemistry, you don’t have anything.”

Celebrating their 12th straight win following their season-opening loss to Stone Bridge, Jreige described their initial defeat as a wake-up call. “That was the best thing that could happen to us,” he said. “After that loss, we had a players-only meeting, no coaches involved on a Sunday, and we talked about what we needed to do to bring our season up.”

The team has no doubt left an impressive legacy. “Walking in the gym, we can see our class on the banners as region and district champs,” Barry said. “It feels incredible, just knowing we’re going out with a bang.”

The Warhawks now have a chance for a thrilling rematch. During last year’s shortened spring football season played under pandemic conditions, the Warhawks were defeated by the South County Stallions in the Class 6 semifinals. The Warhawks will face the Stallions December 4 in the semifinals once again on their home turf.