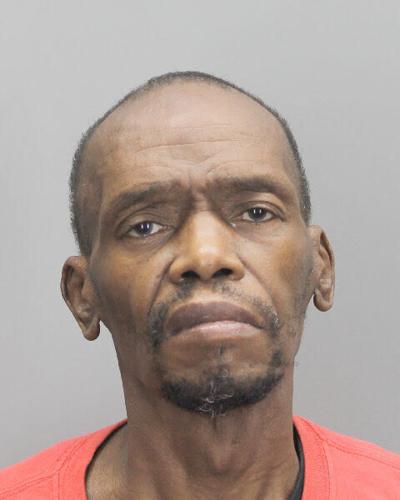 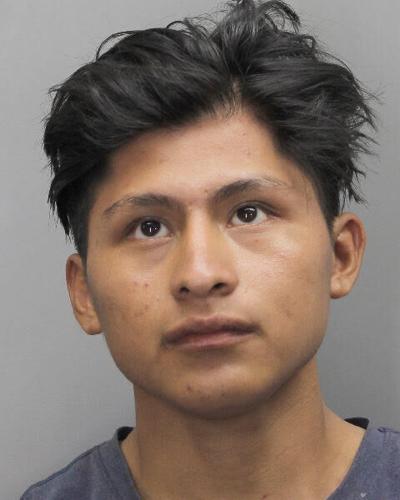 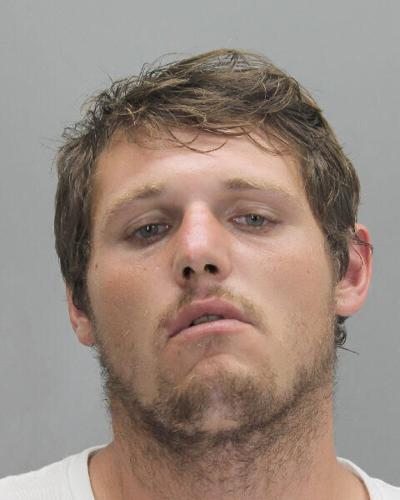 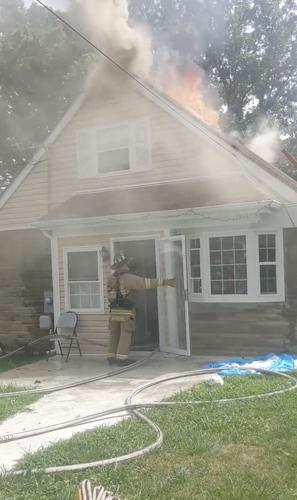 City of Fairfax Police responded to 9626 Fairfax Boulevard, Sunoco, for an attempted robbery at 3:30 p.m. July 10.

It was determined that an unknown subject entered the business, punched a clerk in the head several times and demanded that the cash register be opened. Unable to access the cash register, the subject left the scene on foot before they were located a short distance away.

The investigation also revealed that the same subject was involved in a robbery which occurred on July 9 at 10:01 p.m. at 9617 Fairfax Boulevard, 7-Eleven. Upon entering the store the subject walked behind the counter, placed his arm around the clerk’s neck and demanded that the clerk open the register.  The subject took cash and left the business on foot.

Harley Pratt, 26, of no fixed address was arrested for one count of robbery, one count of wearing a mask to conceal identity, one count of attempted robbery and one count of malicious wounding.  Pratt was transported to the Fairfax County Adult Detention Center and held without bond.

At approximately 7:11 p.m. July 7, officers responded to a home in the 6900 block of Arbor Lane in McLean, after a family friend of Jasper Aaron Lynch, 26, called with concerns for his safety. The family friend said Lynch was throwing objects inside the home and pacing.

A designated co-responder unit responded. This team included an officer assigned to our Crisis Intervention Team (CIT) and a clinician from the Sharon Bulova Center for Community Health. Lynch left the residence prior to the team’s arrival at 7:26 p.m. The team checked the home and remained in the area for an additional period of time to attempt to locate him. Lynch was unable to be found. The co-responder unit then went to the McLean District Station to speak with Lynch’s family by phone.

At 8:34 p.m., a second call for service was placed by a family friend. This time, three crisis intervention trained officers arrived at the home and spoke to a family member on the scene. The officers found Lynch inside holding a bottle and an object, believed to be a large decorative wooden tribal mask. The officers attempted to de-escalate the situation with verbal commands inside the foyer of the home.

Lynch threw the mask at an officer and began to swing the bottle in striking motion. Two officers attempted to utilize their Electronic Control Weapons. Lynch ran toward officers while swinging the bottle. One officer discharged his firearm, striking Lynch four times. Officers immediately rendered aid until fire and rescue personnel arrived. Lynch was pronounced deceased at the scene.

The officer who discharged his firearm has been identified as a 10-year veteran. The officer is assigned to the McLean District Station. Per department policy, the officers involved in this incident have all been placed on restricted duty pending the outcome of an administrative investigation by our Internal Affairs Bureau. An independent review will also be conducted by the Police Auditor. The name of the officer will be released within 10 days, unless there is a credible threat to the safety of the officer involved or if additional time is required to thoroughly complete the risk assessment process.

A criminal investigation into the use of force is being conducted by our Major Crimes Bureau. The department will release body camera footage and audio recordings within 30 days or when it no longer jeopardizes the integrity of the investigation.

The Fairfax County Fire and Rescue and the City of Alexandria Fire departments were dispatched for a reported house fire in the 2500 block of Massey Court in the Huntington area July 6 at 3:45 p.m.

Units arrived on the scene of a two-story, single-family home with fire through the roof. Crews quickly brought the fire under control. There were no reported civilian or firefighter injuries.

Three occupants were home at the time of the fire. A neighbor observed fire on the roof and alerted the occupants. A second neighbor called 9-1-1. All occupants self-evacuated prior to fire department arrival. Smoke alarms sounded after the fire was discovered.

Fire investigators determined the fire was accidental in nature and started in the attic. The cause of the fire was an electrical event involving the attic fan.

Six occupants were displaced because of the fire. Red Cross assistance was offered and accepted. Damages as a result of the fire were approximately $134,500.

Herndon Police officers responded to the Truist Bank at 230 Herndon Parkway, for a reported bank robbery at approximately 12:10 p.m. July 7.

Employees of the bank stated a black male, dressed in black clothing and wearing a face mask, approached a teller, pointed a handgun, and demanded money. The teller gave approximately $2,500 to the suspect, who then left on foot.

As Herndon Police Department units were canvassing the area with the immediate assistance of the Fairfax County Police Department, the suspect was located by a Herndon officer in the vicinity of North Walnut Branch Road in Reston. After a brief foot pursuit, the officer lost sight of the suspect, and units from both agencies worked collaboratively to saturate the area with additional resources and conduct a search.

At approximately 2:20 p.m., the suspect was located hiding in some bushes near Sundance Court and North Walnut Branch Road and was taken into custody without incident by members of the Fairfax County Special Operations Division.

The suspect, identified as Steven Daron Eley, of no fixed address, was interviewed at the Herndon Police Department and taken before the magistrate where he was charged with robbery and use of a firearm during the commission of a felony. The investigation led to additional charges for the robbery that occurred on July 2, at the Safeway at 413 Elden Street.

Eley is currently being held without bond at the Fairfax County Adult Detention Center. The quick apprehension of Eley was made possible by the effective coordination and cooperation between the Herndon and Fairfax County Police departments.

Fairfax County Police detectives continue to investigate a fatal crash that occurred July 6 in the 5600 block of Richmond Highway in Alexandria.

Officers responded at 10:20 p.m. for a pedestrian struck by an initially reported dark-colored, older-model SUV on Richmond Highway near Huntington Avenue. The pedestrian, Doris Anita McPhail, 56, of Alexandria, was taken to a nearby hospital with injuries considered life threatening. She succumbed to her injuries July 7.

Detectives from the Crash Reconstruction Unit determined the driver of a 2007 dark-green Toyota Camry was traveling southbound on Richmond Highway. McPhail was crossing Richmond Highway outside of a crosswalk in a dimly lit area when she was struck in the left lane of the roadway. The driver did not stop to assist or render aid.

As detectives were investigating the crash, the driver of the striking vehicle called 911 and notified dispatchers of their involvement in the crash. Detectives will present details of the investigation to the Office of the Commonwealth’s Attorney for possible charges. Preliminarily, alcohol and speed do not appear to be factors in the crash.

Officers found Guillermo Raymundo Solis, 21, of no fixed address, nearby and arrested him for malicious wounding.  The victim was treated for injuries not considered life threatening.

The reporting person stated that a female subject left the store with a loaded crate of unpaid merchandise. Officers located the subject in possession of the merchandise, nearby. The subject provided false information to officers on scene. The female subject was taken into custody and transported to the Fairfax County Adult Detention Center where she was positively identified.

Anna Neilsen, 24, of Fairfax, was charged with Petit Larceny and False Identification to Law Enforcement. Nielsen was held on a $1,000 unsecured bond.

A community member called the police at 9:43 p.m. July 2 after seeing suspicious activity at a neighbor’s house in the 7500 block of Gresham St.

Officers found Benjamin Scott, 63, of no fixed address, exiting the residence with stolen property. The man was arrested and charged with grand larceny, four counts of credit card larceny, burglary, possession of burglarious tools, stolen property with intent to sell.

City of Fairfax Police officers responded for a report of trespassing at Scout on the Circle, 9450 Fairfax Blvd., July 4 at 8:17 p.m.

Officers located a male subject previously trespassed from this location inside of the clubhouse. Adam Haulu, 20, of Oakton, was taken into custody and transported to the Fairfax County Adult Detention Center where he was charged with Trespass. Haulu was held without bond.

Preliminarily, detectives determined Keith Thomas, 24, was walking in the southbound travel lanes of Richmond Highway. The driver of a 2005 GMC Sierra was traveling southbound on Richmond Highway and struck Thomas in the roadway. While the driver of the GMC called for help, Thomas was subsequently struck by other vehicles. Rescue personnel responded and pronounced him deceased at the scene. Preliminarily, speed and alcohol do not appear to be factors in the crash. The investigation remains active, and details of the investigation will be presented to the Office of the Commonwealth’s Attorney for review.