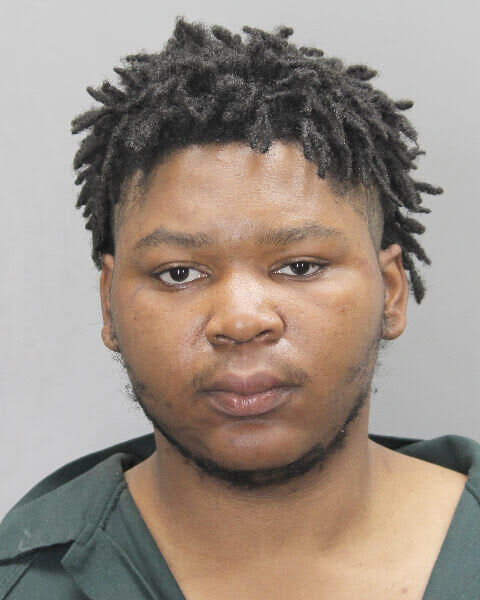 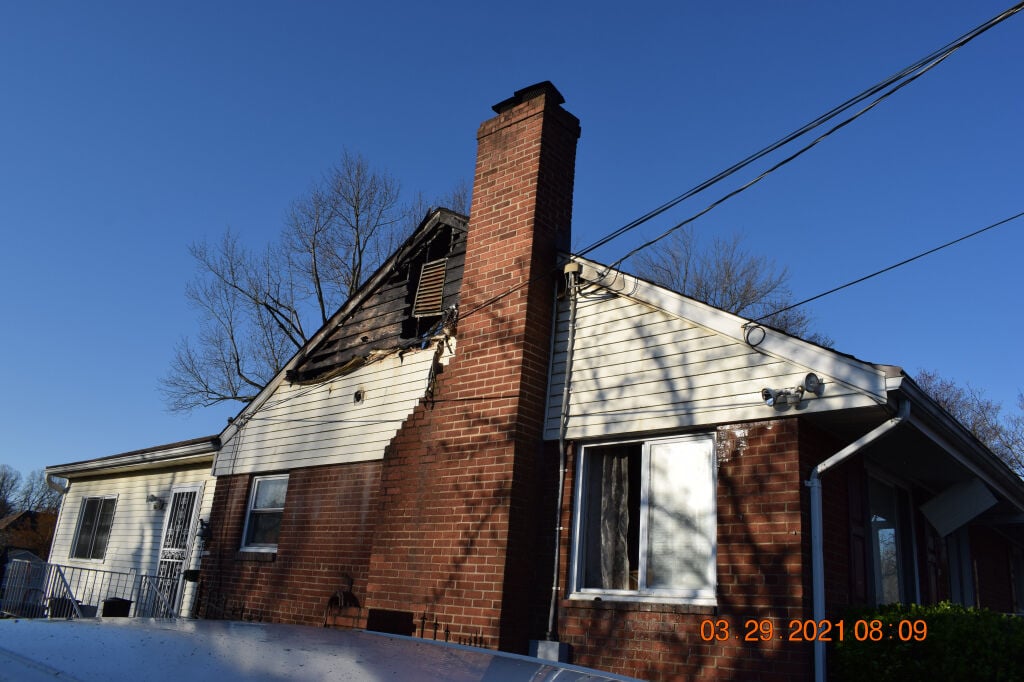 Damage to the attic area of a house in Annandale. 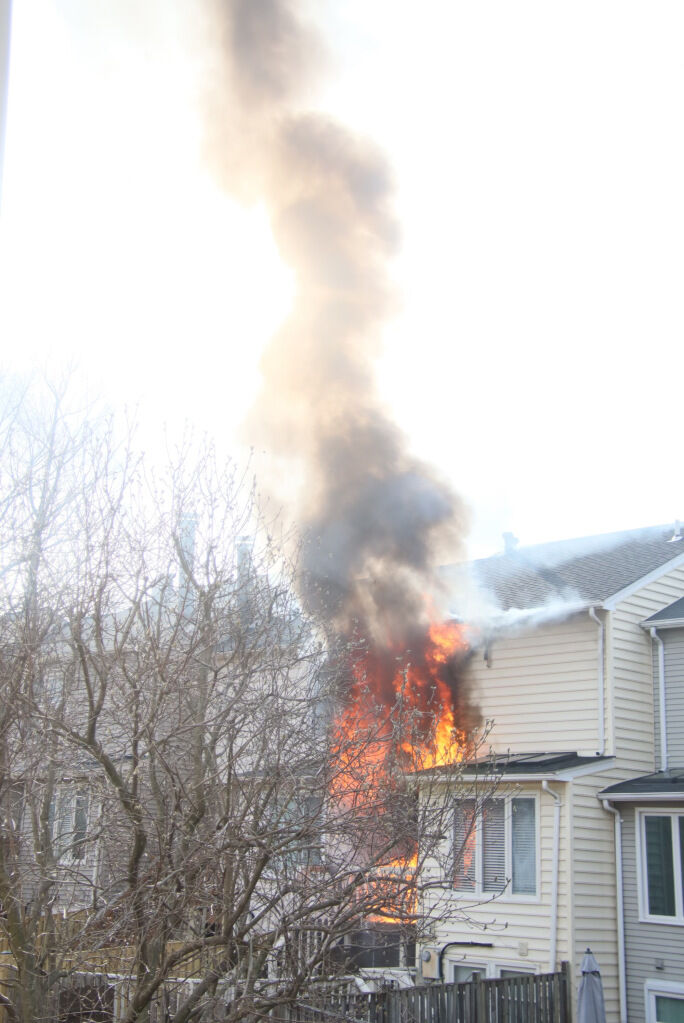 Flames shoot out the back of a Centreville townhouse. 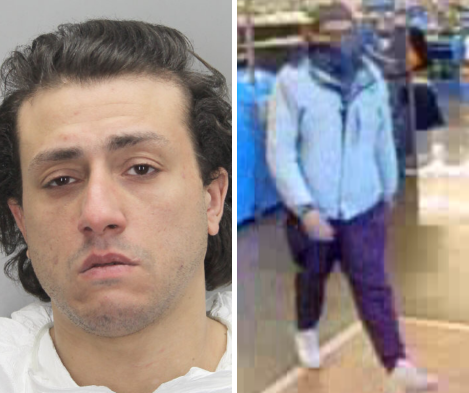 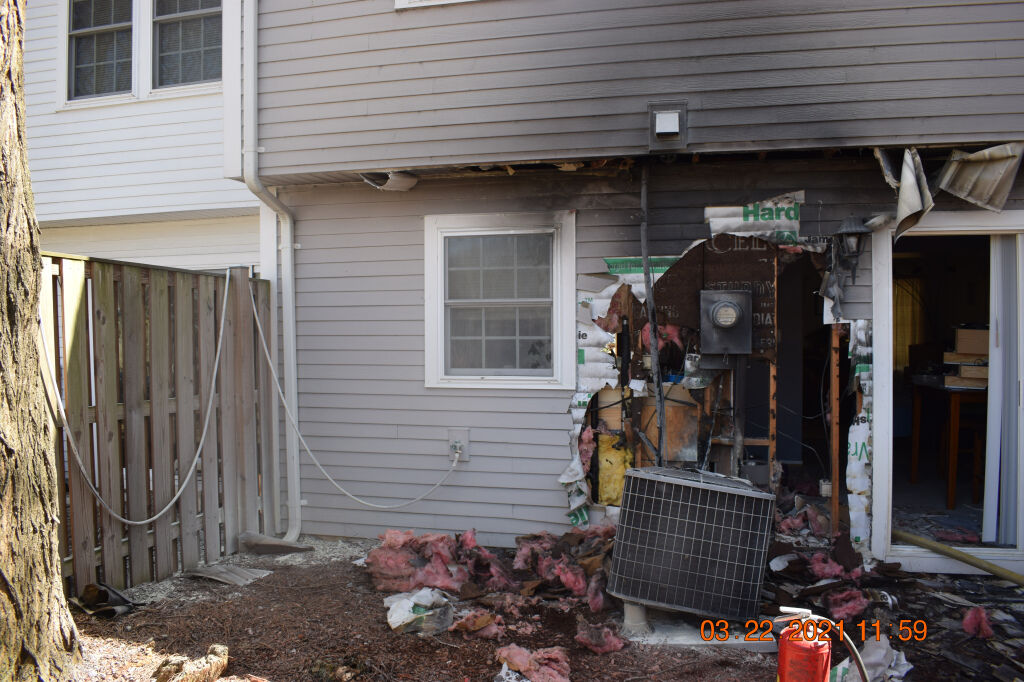 Damage to the back of a townhouse in Newington. 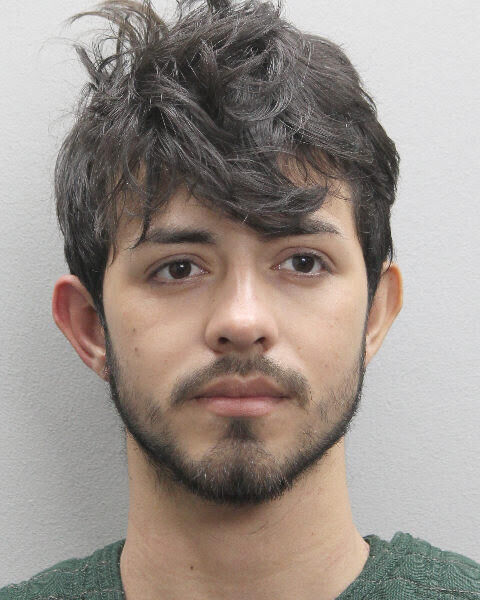 Units were dispatched for a reported house fire in the 7400 block of Valleycrest Boulevard in the Annandale area of Fairfax County March 29, at approximately 6:36 a.m.

Crews arrived on the scene and reported fire showing from the roof of a one-story, single-family home. They quickly extinguished a fire in the attic. There were no reported civilian or firefighter injuries.

One occupant was home at the time of the fire. The occupant smelled smoke and, upon further investigation, she observed smoke visible from the end of the roof. She then self-evacuated and called 9-1-1. Smoke alarms sounded, but after the fire was discovered.

Fire Investigators determined that the fire was accidental in nature and started in the attic. The cause of the fire was an electrical event involving the household wiring.

One occupant was displaced because of the fire. Red Cross assistance was offered but declined. Damages as a result of the fire were approximately $70,000.

According to court documents, in March 2018, Abel Ambrocio, 54, of Alexandria, developed an online relationship with a woman in Honduras over a social media platform. From around October 2018 through at least February 2019, Ambrocio instructed the woman to record and send him more than 100 images of herself sexually abusing her two children—an approximately 3-year-old boy and an approximately 10-year-old girl. Ambrocio instructed the mother to engage in specific sex acts with her children and record herself doing so on multiple occasions, even when she told Ambrocio that one of the children was in pain and crying from the previous sex act. Later, in March 2019, Ambrocio distributed images of the woman sexually abusing her 3-year-old son over a social media platform.

“The defendant’s conduct, which caused the sexual abuse of two young children, is both horrific and heartbreaking” said Raj Parekh, acting U.S. Attorney for the Eastern District of Virginia. “The production of child pornography inflicts devastating and lifelong harm to society’s most vulnerable victims. EDVA is committed to working with our law enforcement partners to bring child sexual predators to justice.”

Ambrocio pleaded guilty to two counts of production of child pornography. He is scheduled to be sentenced August 4 and faces a mandatory minimum penalty of 15 years in prison. A federal district court judge will determine any sentence after considering the U.S. Sentencing Guidelines and other statutory factors.

This case was brought as part of Project Safe Childhood, a nationwide initiative launched in May 2006 by the Department of Justice to combat the growing epidemic of child sexual exploitation and abuse. Led by U.S. Attorneys’ Offices and CEOs, Project Safe Childhood marshals federal, state, and local resources to better locate, apprehend, and prosecute individuals who exploit children via the Internet as well as to identify and rescue victims. For more information about Project Safe Childhood, please visit www.justice.gov/psc.

A Centreville man died following a crash that occurred just before 4 a.m. March 29 at the intersection of Arlington Boulevard and Javier Road.

Detectives from the Fairfax County Police Department Crash Reconstruction Unit have preliminarily determined Dashdavaa Zambalgarav, 49, was the lone occupant and driver of a 2008 Lexus RX traveling west on Arlington Boulevard when he drifted into the center median and crashed into a traffic pole at Javier Road. Zambalgarav was taken to a hospital where he succumbed to his injuries. Detectives continue to investigate the circumstances surrounding this crash, but preliminary, do not believe speed or alcohol were factors.

A man entered the building being used as a hypothermia shelter in the 4700 block of North Chambliss Street and began assaulting several people inside March 20 at 6:54 a.m.

The man made his way outside where he damaged a car and spat on responding officers before being taken into custody. Abdul Deen-Sie, 24, of Alexandria, was charged with three counts of malicious wounding, two counts of assault on law enforcement, obstruction, destruction of property and assault.

Units were dispatched for a reported townhouse fire in the 8400 block of Eucalyptus Court in the Newington area of Fairfax County March 22, at approximately 11:56 a.m.

Crews arrived on the scene of a two-story, middle unit townhouse with fire showing from rear of the home. They quickly extinguished a small fire. The fire was contained to the outside of the home. There were no reported civilian or firefighter injuries.

No occupants were home at the time of the fire. A contractor working at a nearby house saw smoke coming from the back of the house and called 9-1-1.

Fire investigators determined that the fire was accidental in nature and started on the exterior of the rear of home. The cause of the fire was an electrical event involving the service lateral to the house.

Three occupants were displaced because of the fire. Red Cross assistance was offered and accepted. Damages as a result of the fire are approximately $40,000.

A 27-year-old man is facing charges after sexually assaulting a woman who was sitting on a bench near a shopping center in Tysons.

Officers were called to the 1500 block of Cornerside Boulevard for a report of a sexual assault Mar. 4. The victim was sitting on a bench around 4 p.m. the day prior when the unknown man approached her, engaged her in conversation then sexually assaulted her. The woman screamed and was able to leave. As she walked away, the man continued to follow her. A bystander saw the man following her and escorted her inside a business.

As Major Crimes Bureau detectives were working on the case, the man was seen in the area again Mar. 12. Officers responded and took Mohamed Souidi, no fixed address, into custody. He was charged with object sexual penetration and abduction. He is being held at the Fairfax County Adult Detention Center without bond.

Detectives continue to investigate this case and are asking for your help. Considering the time and location of the assault, detectives believe there may have been people in the area who unknowingly witnessed this crime. If you have any information about this case, or you recognize this man and believe you may have been assaulted by him, please call our detectives at 703-246-7800, option 3. Tips can also be submitted anonymously through Crime Solvers by phone – 1-866-411-TIPS (866-411-8477).

Victim specialists from the Major Crimes Bureau’s Victim Services Division have been assigned to this case to ensure the victim is receiving appropriate resources and assistance.

A 61-year-old man has died as a result of injuries from a crash that occurred Mar. 4 in the parking lot of a 7-11 in Chantilly.

Officers responded at 5:32 p.m. to 14515 Lee Jackson Memorial Highway for man who was hit by a 2020 Jeep Gladiator. The Fairfax County Police Department Crash Reconstruction Unit detectives determined Murvin Withers was walking across the parking lot when the driver of the Jeep accidentally hit him. The driver remained at the scene. Withers was taken to the hospital with serious injuries and later passed away on Mar. 21.

Detectives determined neither speed nor alcohol were factors in the crash and no charges are anticipated.

Crews arrived on the scene of a two-story, middle unit townhouse and reported fire evident to the rear of the home. The bulk of the fire was on the outside of the home. However, fire did extend inside to the first and second floors. Firefighters worked quickly to extinguish the fire. There were no reported civilian or firefighter injuries.

Fire investigators determined that the fire was accidental in nature and started on the back deck. The cause of the fire was improperly discarded smoking material.

Two occupants were displaced because of the fire. Red Cross assistance was offered and declined. Damages as a result of the fire were approximately $155,000.

The members of your Fairfax County Fire and Rescue Department want to help eliminate this totally preventable cause of fire and keep Fairfax County safe. If you smoke, or know someone who does, please take a moment to learn how to prevent starting a fire outside.

A man approached the victim in the 1600 block of International Drive March 23 at 11:30 a.m., displayed a knife and demanded property before walking away.

Responding officers arrested the man, Jason Stokes, 38, of Washington, D.C. and charged him with robbery.

A person concealed merchandise inside Home Depot at 6555 Little River Turnpike and attempted to leave in a car March 24 at 11:10 a.m.

Someone forced entry into TCS Computer at 6343-B Rolling Road and took property March 21 at 3:45 a.m.

Detectives identified and arrested the man, Toan Phan, 25, of Burke, and charged him with burglary.

Officers responded for a man in distress who ran into the road in the 2700 block of Centreville Road when officers arrived March 22 at 11:13 a.m.

Oscar Sabillon, 19, of Herndon, fought officers during the arrest and attempted to grab one officer’s gun and taser. Sabillon was charged with three counts of assault on law enforcement, attempt to disarm officer, prevent officer from making an arrest and indecent exposure. One officer was taken to the hospital for treatment of a minor injury while another officer was treated at the scene.