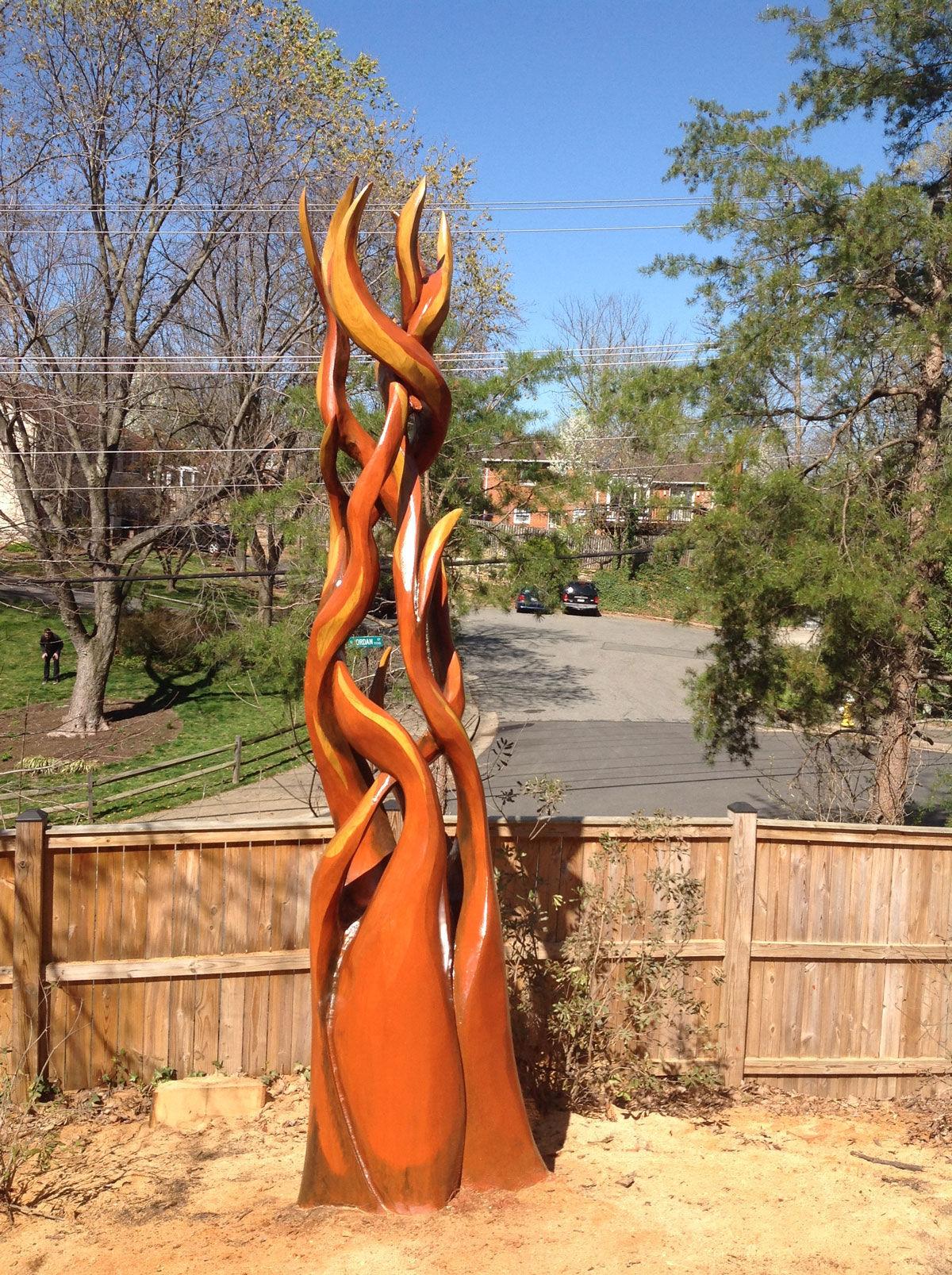 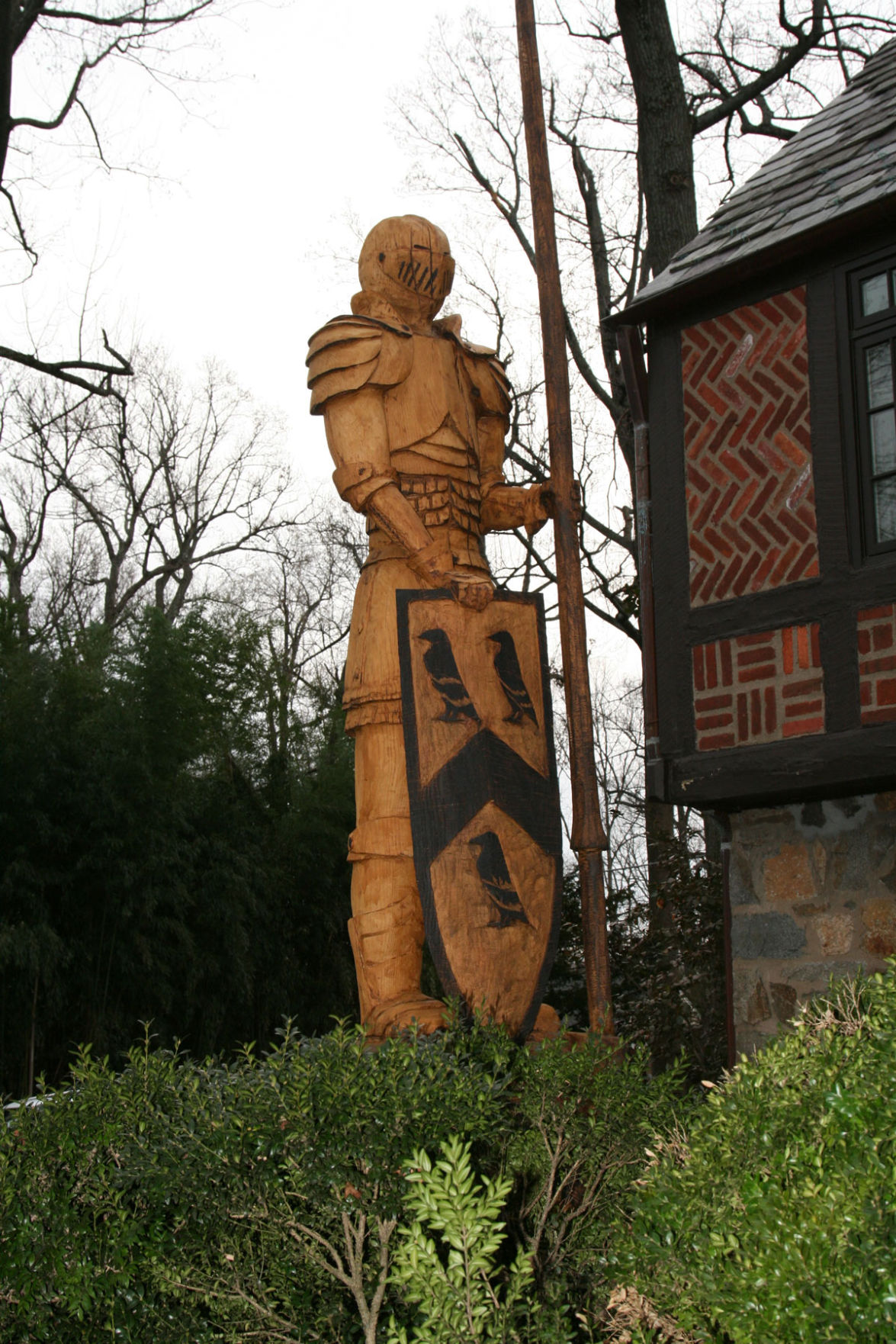 A knight in a suit of armor, in front of a home fitting to the piece.

A knight in a suit of armor, in front of a home fitting to the piece.

In an area of seemingly endless lawyers, lobbyists, government officials, it can be refreshing to meet with someone working in a field because they are both good at it and love it.

Falls Church resident, Andrew Mallon, 33, is the owner of AM Sculptors. His specialty is wood carving.

He wasn’t really into school when he was a kid, he was really creative. He took shop at Washington and Lee High School and his teacher got him a job as a carpenter. Over the years, Mallon had built furniture and cabinets to incorporate an artistic edge.

“I wanted to do more, do something a little bit more unique. I got into the carving with the gauges and the smaller chisels and it just wasn’t fast enough. It wasn’t big enough; it wasn’t enough for me. For instance, I carved a hand one time and it took me like six months to do, just whittling away at different times. I was like I need a faster way of doing this. I had seen people on TV doing it with a chainsaw and I was like, you know what, once I realized I had the visual ability to carve anything. I learned that I could do it with the hand tools,” Mallon said. “…I was like from that day forward I decided I was going to be a chainsaw carver and I kept saying, I’m going to do it, I’m going to do it.”

However the soon-to-be chainsaw carver didn’t have much experience using a chainsaw so his brother and wife (girlfriend at the time) convinced him to take a class. He found a one day course in Pennsylvania.

“I picked it up real well. [The instructor] said I was one of his better students. So maybe he says that to all of his students, but he said that I picked it up faster than most. I think it had to do with dealing with tools throughout my whole life. It’s just another tool in my hands. So once you taught me the safety things with it and how to properly use it. I probably had only used a chainsaw five times in my life, maybe, to cut a limb or two. So I had never really used one. Then he taught me that; I cashed in my change jar, bought a big saw. A couple weeks later, you need a small saw also, so I bought that and I haven’t turned back since. I just kept carving.”

He took the class in 2012 and continued to do carpentry for the most part, slowly building his clientele. Since March, he has been wood carving full time, much of his work includes stump carvings. When people have to cut down a tree, but don’t want to get rid of it fully they can call up Mallon to make something out of it. Doing the stump carvings Mallon frequently gets a response out of neighbors, which he loves.

“I like the reaction from neighbors and just the homeowners always is fun,” he said. “I’ll have people stop by while I’m doing it and they’re just a neighbor, and they’ll say thank you very much for doing it. They really appreciate the fact that I come there and do that.”

In suburban northern Virginia I would think work might be hard to find. Mallon explained, that yes, he does more work out in the country and those sculptors tend to be eagles, owls or bears. But ultimately, he explained you just cater to the market.

“I just did one over in Alexandria that was an abstract piece; it was supposed to be flames. So it looks like flames, it’s 12 foot tall flames, that turned out pretty cool. I mean, different people want different things. In the area, I haven’t found it too hard yet [to find work],” Mallon said. “I’ve just got to get my name out there more and more people that know me and know that I’m around. Enough people are interested. I think if there was 10 other carvers in the area, I don’t think this would be the area. It would be washed out. There’s not that many people. The fact that I’m, you know, me and there might be there’s a couple other people I’m sure and older guys also, but you know I don’t have much competition so that helps.”

Being one of the few wood carvers in the area, although with competitive perks, does create creative difficulties for Mallon. He has difficulty finding people where he can learn from. But even that problem he has learned to overcome by going to a yearly gathering of carvers in Ridgeway, Pa.

Despite the obvious challenges of selling art and even without a built in market for wood carving, Mallon remains passionate and optimistic. He plans on selling at fairs as summer rolls around and doing wood carving events. He even hopes one day, when he has decided he doesn’t feel like building scaffolding around trees anymore, to have his own studio store front to display his work and others.