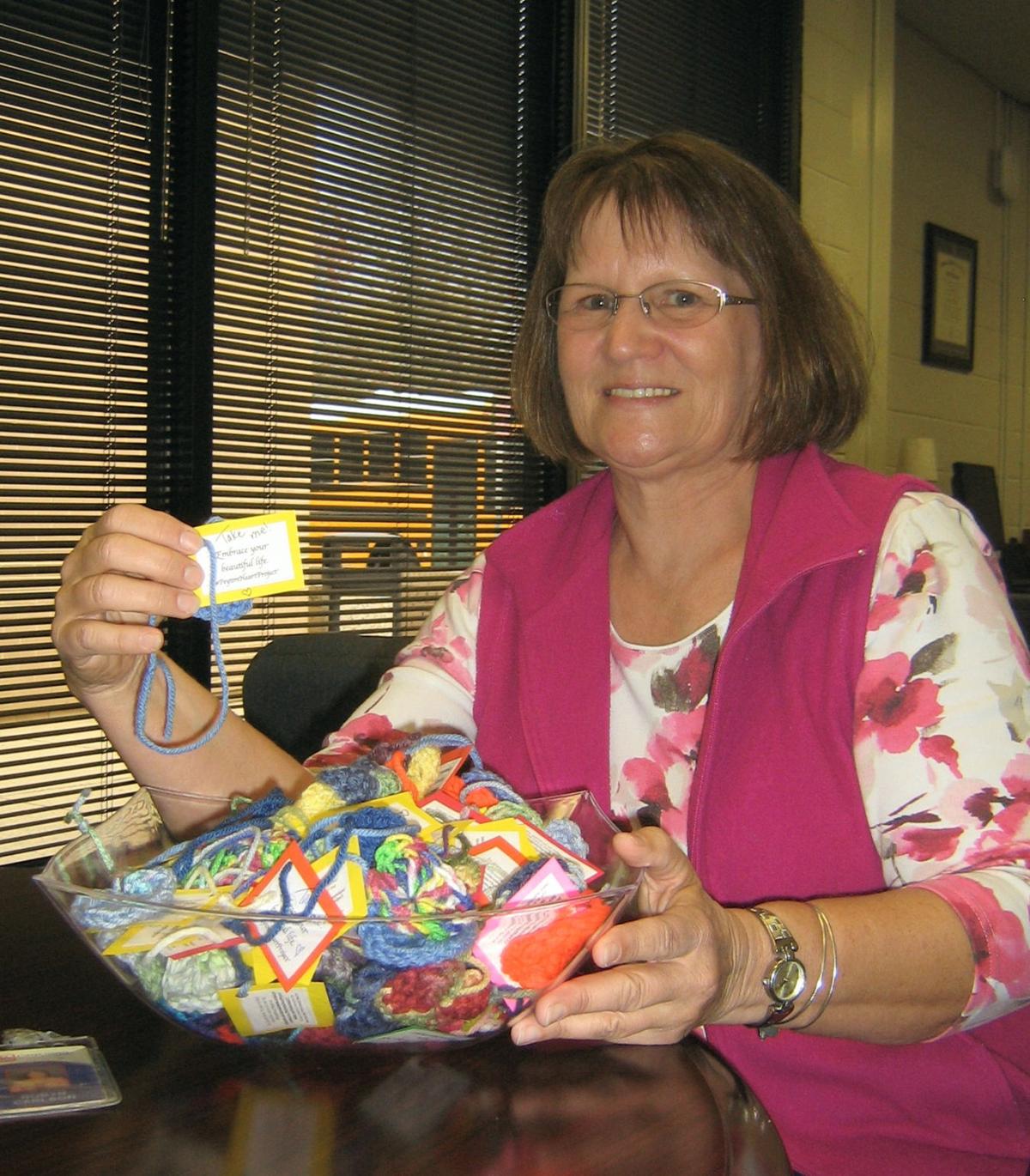 The idea to do the Peyton Heart Project at Langston Hughes Middle School originated with school bus driver Robyn Carlson, who has driven a bus at the school for 23 of her 24 years as a driver. 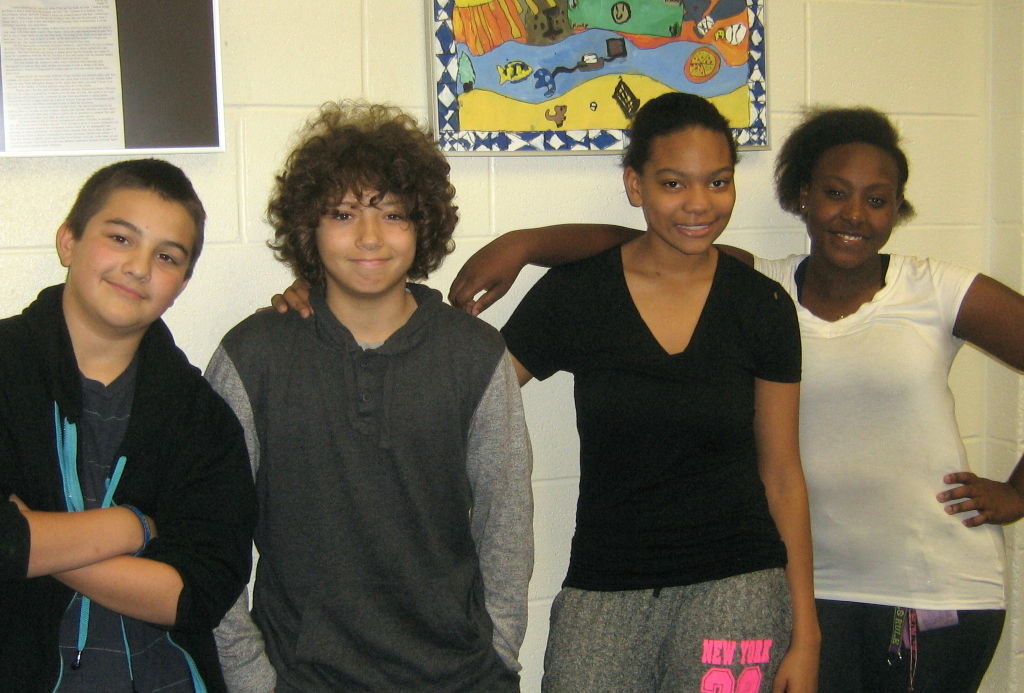 Four of the Langston Hughes Middle School students involved in the Peyton Heart Project are, from left: Trey Thompson and Miguel Otero, both 13, and Nia Winston and Darcel Nieves, both 14. 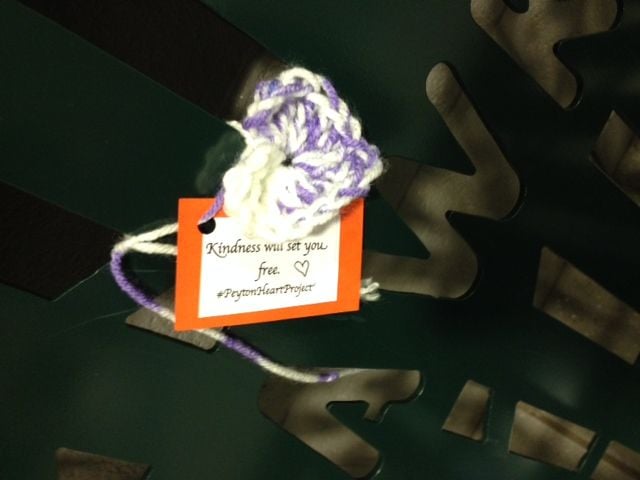 A closeup of a heart distributed by Langston Hughes Middle School students for the Peyton Heart Project.

The idea to do the Peyton Heart Project at Langston Hughes Middle School originated with school bus driver Robyn Carlson, who has driven a bus at the school for 23 of her 24 years as a driver.

Four of the Langston Hughes Middle School students involved in the Peyton Heart Project are, from left: Trey Thompson and Miguel Otero, both 13, and Nia Winston and Darcel Nieves, both 14.

A closeup of a heart distributed by Langston Hughes Middle School students for the Peyton Heart Project.

For the past few weeks, small, crocheted, needlepoint and knitted hearts have been appearing in all kinds of places throughout the Reston area.

Their appearance is not random but part of a national, anti-bullying initiative—The Peyton Heart Project--taken up by local Langston Hughes Middle School.

Attached to each colorful heart is a tag, reminiscent of those in the childhood classic “Alice in Wonderful.” However, instead of saying “eat me,” these tags, which do not ask for money, urge finders to take photos of the hearts and then post them on The Peyton Heart Project Facebook page, Twitter or Instagram using the hashtag #PeytonHeartProject.

Although finders may keep the hearts, attached are tags which offer inspirational sayings, suggesting, “You are beautiful. Pass it on.”

The Peyton Heart Project was founded after 13-year-old Peyton James died by suicide in the fall of 2014 after years of being bullied. According to the project’s website each heart represents “the delicate heart of a life lost to suicide.”

The site further notes: “We hope the hearts cause people to stop for a moment and reflect on a young life lost to suicide, on bullying and on the fact that everyone’s life matters. … We would like to inspire others to join us on this mission of kindness.”

The idea to do this truly heartfelt project at Langston Hughes originated with school bus driver Robyn Carlson, who has driven a bus at the Reston middle school for 23 of her 24 years as a driver.

Sitting recently in the conference room of Langston Hughes Principal Aimee Monticchio, Carlson said, “I really truly love kids, and I care. … Kids need to learn caring is important, and every single person in this school is here because they care. They need to know that.”

She added, “I’ve watched thousands grow up in the Reston area, and when they’re on my bus, they’re my kids.”

An avid crafter, Carlson, a mother of four and grandmother of four, learned of The Peyton Heart Project online. She recalled, “It touched me so deeply that I felt a need to be part of it.”

After getting the go-ahead from Monticchio, who also involved Langston Hughes social worker Marcela Dzeda, Carlson began crocheting. When she was done, she had crocheted 950 small hearts for students to tag and distribute.

That number, she explained, represented the life span of her father, who died in November at the age of 95. Quietly tearing up, she admitted, “Honestly, this project has helped me get through a rough time, given me a focus to give back.”

Monticchio was impressed not only by the thinking behind the Peyton Heart Project but also Carlson’s commitment to it. “Robyn cares on a very deep level. … I was touched by her real philanthropic attitude and need to get the message out,” she said.

It was decided to incorporate the Peyton Heart Project and its message about fighting bullying with hope and kindness into Langston Hughes annual Mental Health Week.

The Family and Consumer Sciences Class added some needlepoint hearts as did the school’s Knitting Club. Members of the school’s AVID (Advancement Via Individual Determination) college prep program also enthusiastically joined forces with the Grace Club—a program to empower girls sponsored by the Reston chapter of The Links, a volunteer service organization whose memberships consists primarily of professional African-American women—to distribute the hearts.

“Our goal is to get as much student participation as possible, get as many kids as possible invested,” Dzeda said.

On a recent afternoon before the holidays, four of the Peyton Heart Project’s student participants gathered around Monticchio’s conference table to reflect on the impact of their involvement. All eighth-graders, they included Trey Thompson and Miguel Otero, both 13, and Darcel Nieves and Nia Winston, both 14.

“It was fun to plant them. It also gave me a sense of accomplishment, made me feel I did something good,” Trey said.

“If people found them, it gives the feeling that people care; that’s a good feeling to have. … It made me feel good about myself,” Miguel suggested.

Darcel recalled that Robyn Carlson, who is her bus driver, personally asked her to help out. She was really convinced to “try,” she said, after having a particularly bad day. “I was in the office crying,” she said, “and asked about the hearts in a bowl. … I thought about making the day better and brighter for others and making people smile.”

Nia, a member of both the Grace Club and AVID, said she joined in because it gave her chance “to know how things really are. … It opened my mind.”

Peyton’s story, she said, was another big motivation. “It made me sad,” she recalled, “and I know how it feels, too. It feels like you’re in a hole. So, when I heard about it, I connected to it. … When we passed out the hearts, each heart made me feel happier. I hope when people pick them up, it changes mindsets.”

Darcel also identified with Peyton’s story, divulging that she has been the victim of bullying since the third grade. “It’s been tough, but I never thought of committing suicide, but when I heard the story, I knew what they were talking about,” she said.

Both Trey and Miguel suggested that because of the omnipresent character of social media, bullying today is even harsher.

“Anyone with a phone can be bullied,” Miguel said.

Trey acknowledged that the Heart Project and Peyton’s story made him much more aware of bullying than before. “There’s been a lot of lessons,” he mused, recalling a recent conversation with his father. “My dad said when he was a child, he could go home and forget it. Now it’s 24/7.”

Listening to the students’ observations, Dzeda said, “It’s been a labor of love orchestrating everything. But, it’s really worked out.”