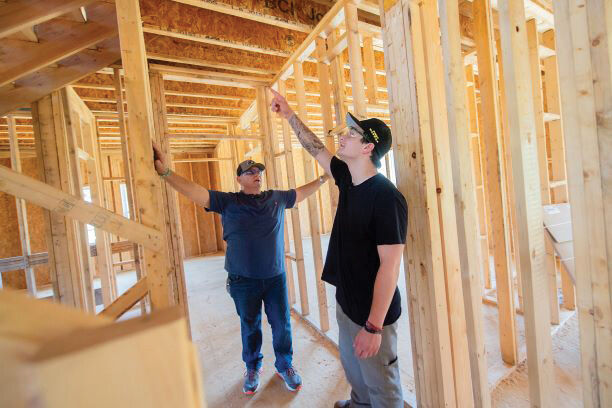 A “for sale” sign is now up outside a brand new, million dollar home in Springfield.  Right away, prospective buyers will be drawn to the sparkling quartz countertops, designer bathrooms, and massive recreation room. But before it was a finished house, it served as an interactive classroom where Fairfax County Public School (FCPS) students learned to build a home from the ground up.

Shane Bhatti is a 2021 graduate from South County High School in Lorton, and is now working toward a career in carpentry. For the past year, he spent time installing hardwood floors, hanging drywall, and doing tile work at the 5,200 square foot home. It’s the tenth home in the Spring Village Estates to be built in part by FCPS students, with another home already under construction next door. This program is a partnership between FCPS and the Foundation for Applied Technical Education (FATE), and it’s been around for 40 years; but this year presented new challenges as COVID forced construction to shut down.

“It’s kind of hard to learn construction through a screen,” Bhatti said.

Career and Technical Education (CTE) classes were some of the first to return to in-person learning last fall, but they had to be put on hold again after winter break. Bhatti says once students were able to return this spring, he realized construction was something he wanted to pursue after graduation.

“This is something I could actually enjoy,” he said. “Something I’m not forced to learn. But something where I’m here because I actually want to learn this.”

Bhatti’s mom, Michelle Munday, says her son thrives in interactive learning environments. That’s partly because he is a student with special needs and has a mild form of cerebral palsy, which impacts his hand movements. She said he’s worked hard to keep up, and even took advanced classes in high school. Munday says she watched with pride over the last year as her son discovered a new passion for building homes, and she credits instructor Ron Meinert for helping him along the way.

“Mr. Meinert wants to teach these kids everyday skills,” Munday said. “Just having that hands-on approach of somebody not judging, but teaching. And just diving in. He’s not just a teacher; he’s in it. And Shane therefore became more engaged, and more involved. And the more he learned, the more proud he became of his accomplishments and the things he was learning.”

Around 15 to 20 students, all over the age of 16, are involved in each house build. They work alongside subcontractors who do things like dig the basement and install the roof. This year, students weren’t able to do as much hands-on work as normal due to limited in-person class time. But Meinert says students were still able to learn valuable skills, as well as “real world” lessons.

“I teach them to have pride in what they’re doing,” Meinert said. “I take students and I tell them what to do and I walk away. I don’t stand there and tell them ‘no no no’. I let them do it wrong. I come back and say ‘you didn’t listen’. And I make them tear it out. And I teach them to be on time. Very important to me. If you’re late, I’m gonna fire you. So that’s the kind of life stuff I teach them.”

The five bedroom, four bathroom house at 7425 Foundation Way is listed for $1,080,000, and is now on the market. It’s built with Universal Design, meaning it has minimal steps and extra wide door openings, making it safe and accessible for everyone, regardless of age or physical ability. Realtor Greg Stiger has sold nine other student-built homes in Spring Village Estates. His company, Integrity Real Estate Group, gives $5,000 in scholarship money to construction students each year.

“One of the things that’s so rewarding about the program is seeing those parents, many who are not from means, come to the house, and see that their child helped create that beautiful home,” Stiger said. “That makes it all worthwhile.”

These homes are funded through FATE, and proceeds are used to fund future projects. More information about the Residential Construction program can be found at https://bit.ly/3xXKE3p.