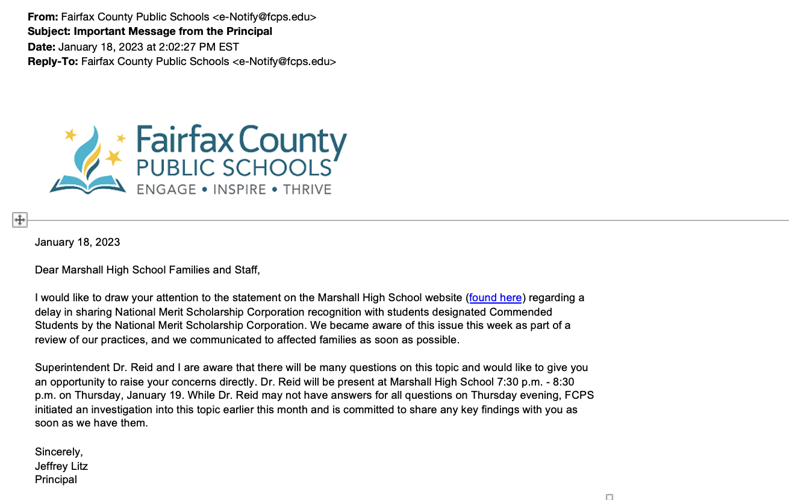 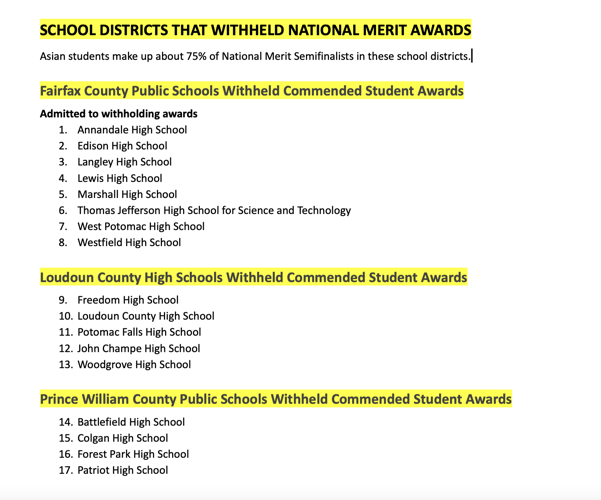 This brings to 17 the number of high schools in Fairfax County, Loudoun County and Prince William County that have admitted to withholding

awards. Many other Fairfax County high schools haven’t yet released the results of their reviews.

An analysis by Fairfax County Times reveals that an estimated 75 percent of National Merit Semifinalists – a notch above Commended Students – are of Asian heritage, validating the questions raised in a new civil rights investigation by Virginia Attorney General Jason Miyares.

In fact at Marshall High School this fall, 71 percent of National Merit Semifinalists are minority students, with most of them Asian American.

Notably, Virginia Gov. Glenn Youngkin announced he is introducing legislation to make it mandatory for schools to report National Merit awards to students and parents.

In identical language to other school principals, the Marshall principal posted a message online, saying:

As part of a review of our own practices, it has come to light that Marshall High School students designated as Commended Students this past fall were notified later than we would have hoped.

As soon as this was confirmed, Marshall High School notified all impacted families, and staff is contacting colleges where these students have applied to inform them of the National Merit Scholarship Corporation commendations. We are sincerely sorry for this error.

The issue at Marshall High School will now form part of the investigative review by an independent third party into the circumstances surrounding this situation that has already been initiated by FCPS. We are committed to sharing any key findings and any updates to our processes to ensure future consistency in appropriate and timely notification of National Merit

We understand and value the hard work and dedication of each and every student, and the families and staff who support them. Please be assured that we remain resolutely committed to supporting every student in reaching their unique and fullest potential.

The inventory of schools that have admitted to withholding awards now numbers 17 area schools.

Parents and students have access to their NMSF scores in collegeboard when PSAT scores are released. The state releases the score cut off in September. Does not dismiss the school oversight but if parents were paying attention, they would have known.

Guess what. The more they try to suppress achievers, the more time I devote to my child's homework and activities, the more I work for his education, and the more money I spend to better him in every way. If America does not appreciate our efforts, many other countries will.

Guess what. The more they try to suppress achievers, the more time I devote to my child's school, extra homework, and activities, the more I work for his education, and the more money I spend to better him in every way. If America does not appreciate our efforts, many other countries will.

So a group of people work hard to raise their kids and provide good examples of morals and ethics and the benefits of a good education. Now other groups don't follow that same path because they have been indoctrinated by so called leaders and organizations that they are historically entitled victims. The woke politicians think it's not fair these people were victims 160 years ago. There have been many peoples that have come to America from far worse moments in history that have been successful. Those people that always want something but don't want to work for it will always be the winer's of society

I am Asian and laugh at those dumb Asians embracing the woke culture that runs counter to the pragmatism and idea that hardwork creates rewards. Here is an example of woke academia trying to bring others up by bringing high achievers down in the idealistic facade of inclusion and equality. Jokes on you my dumb self righteous Asian peers. Wallow in the exclusion of college race quotas and having your achievements hurried for the sake of not having others' feelings hurt that they did not put forth the same effort as you.

SEVENTEEN schools can NOT claim....

"This was just Administrative ERROR".....

This is the Lunatic Left's WOKE BULL SCHIFF... run amuck!

Thank goodness Youngkin is in office.

With Northam, there would be no investigation and no proposed legislation to stop this equity based nonsense that is replacing hard work and merit.

High achievement from non favored groups is frowned upon.