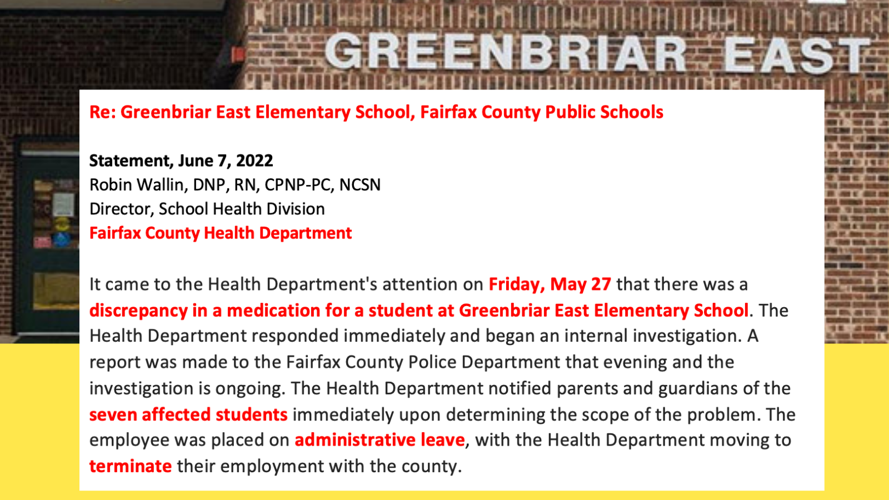 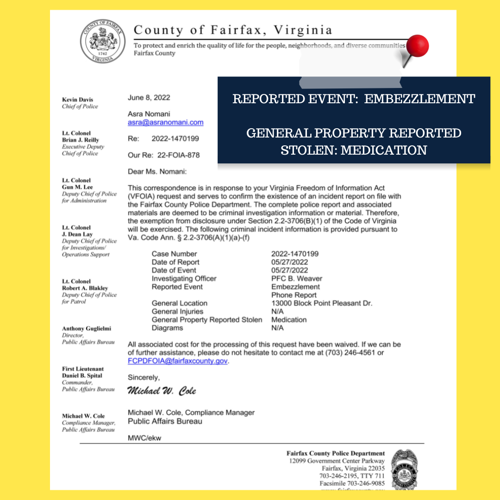 Parent alleges the school district is ‘covering up’ crimes

On May 27, local father Brett Byrnes, a former military officer, walked through the front green doors of Doorway 1 at his second grade daughter’s elementary school, Greenbriar East. The school nurse had just called to say she was out of his second-grade daughter’s dosage of Adderall, a prescription drug used to treat ADHD, or attention deficit hyperactivity disorder.

What the Byrnes uncovered was any parent’s nightmare: possibly for months, the school’s health aide, Jennifer Carpenter, had allegedly stolen their daughter’s Adderall – a stimulant –  and given her Claritin, an over-the-counter medicine used for allergies. Their daughter wasn’t alone: under the eye of school officials at their neighborhood school, where the mascot is the Roadrunner, Carpenter had allegedly stolen medicine from six other children.

In a June 7 letter, addressed to “Parents” of the seven children impacted, Robin Wallin, director of the Fairfax County Health Department’s school health division said the FCPD and Child Protective Services “have active investigations into the diversion of medication that affected your student.”

In response to a public records request, FCPD said that it started an investigation, case number 2022-1470199, on May 27 related to “Embezzlement.” Under “General Property Reported Stolen,” police say, “Medicine.”

But two weeks later, Fairfax County Public Schools hasn’t yet notified school or school district parents of this alleged crime. “It’s truly criminal that medicine has been stolen from children. This is a systemic problem,” Byrnes said.

“They can’t even find the audit documentation,” said the mother of  a fourth grader, 10, whose Ritalin, also used for ADHD, was allegedly stolen. “It seems the school is covering up their failures.”

This “discrepancy” is important because it reflects the growing frustration of parents trying to advocate for the safety of their children, only to be dismissed, demonized as engaging in “domestic terrorism” and even handcuffed, from Uvalde, Tex., to Loudoun County, Va.

Asked why the school system hasn’t notified school or school district parents, FCPS spokeswoman Helen Lloyd said, “As these staff are hired by the FCHD, you need to direct your questions through them.” Carpenter had an out-of-office response (from 2019) on her official school email address. She couldn’t be reached at various phone numbers listed in the area for her name.

At 6 p.m, on May 31, the second grader’s parents got a letter from Dr. Gloria Addo-Ayensu, the Fairfax County health director, notifying them that health department officials had learned there was a “discrepancy in medication” because a health department employee had been “diverting” medication “belonging to students.”

Then a shocker, “...we have reason to believe that the employee may have on occasion given your child a generic over the counter [cq] antihistamine in lieu of her prescribed medication.”

The second-grader’s rocky school year was now making sense. Two weeks earlier, her mother told the principal they were considering holding their daughter back because she was falling behind in school.

In September 2021, Carpenter had worked out a protocol with the Byrnes to get their daughter, age 7, her medicine around 11:40 a.m. At one point on Oct. 1, 2021, at 9:14 a.m., Carpenter reassured the second-grader’s mother that she had her dosage of medication, emailing her: “Yes she took it. It was a chaotic shift among the kiddos with changing classes and specials. I had to fish her out so to speak. Gonna grab her again at 11:40!”

“This is horrifying – and it’s not surprising,” said Callie Oettinger, editor of SpecialEducationAction.com and parent of students in FCPS. “Since denying access to medicine results in denying access to education, this is a civil rights violation.”

“The lesson of this parental nightmare is that vigilance matters,” said the Fairfax County Parents Association. “The school system needs to listen to parents, not ignore them, when they raise the alarm on serious issues. The school must alert parents when situations like this occur.”

Since they learned this shocking news, the Byrnes have gone to school every day to give their daughter her medicine. She has been doing much better in school.

Asra Nomani is a senior fellow at the Independent Women’s Network, which is dedicated to helping parents around the country advocate for children. A former Wall Street Journal reporter, she can be reached at asra@asranomani.com.