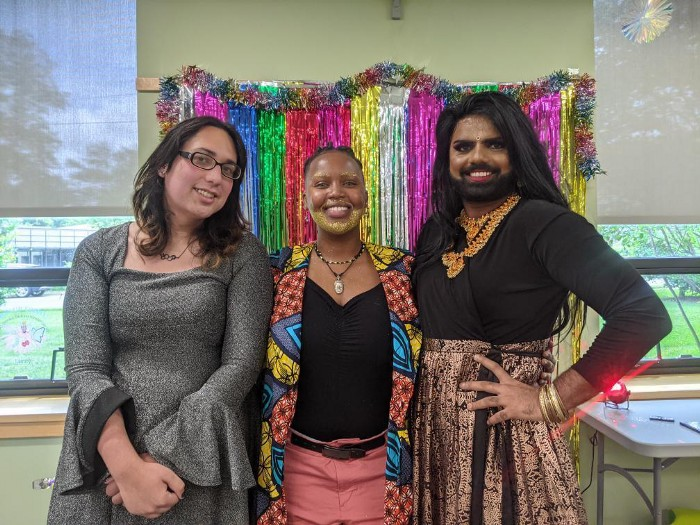 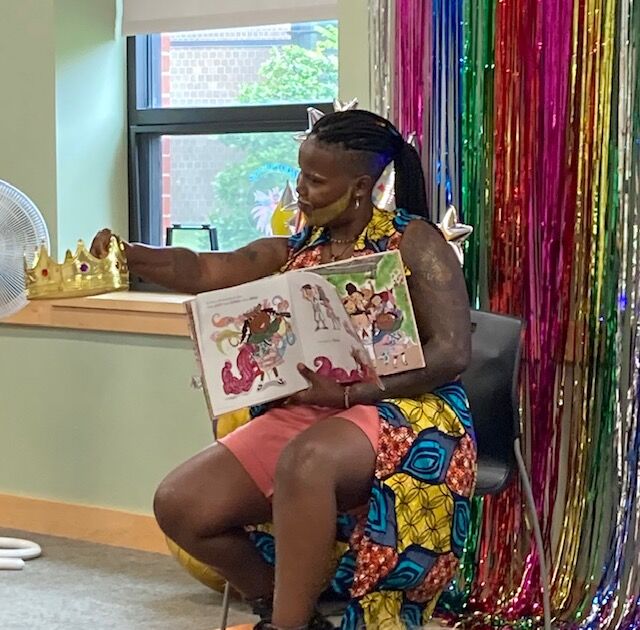 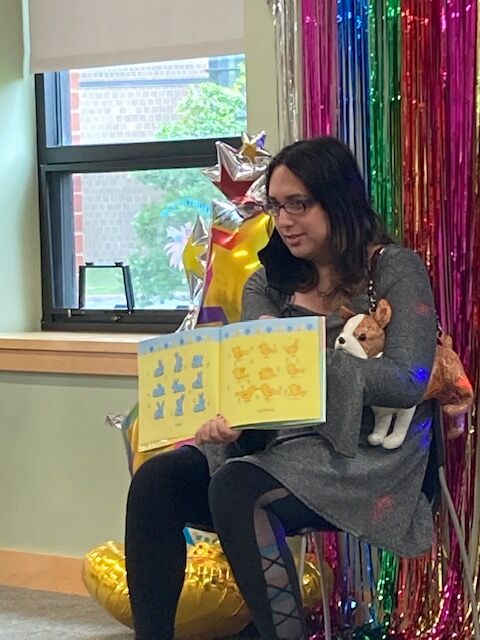 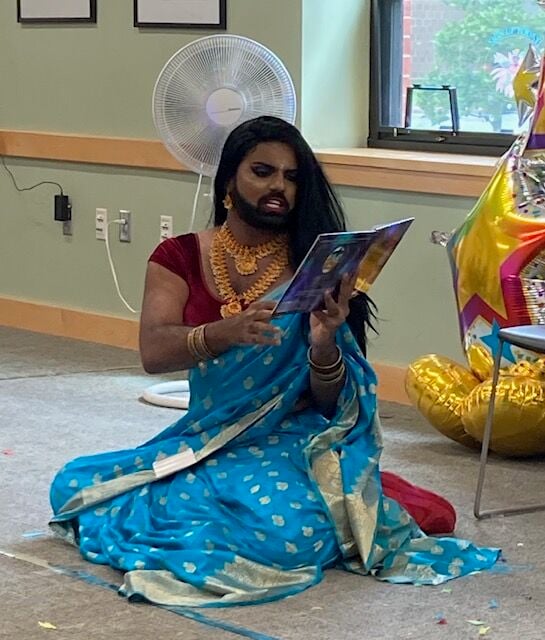 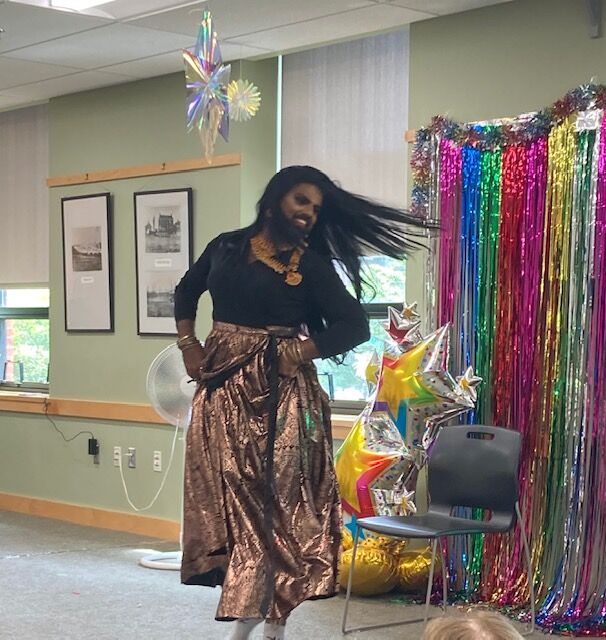 Drag Storybook Hour has finally come to Fairfax County and it gets mixed reviews from residents. The Dolley Madison branch of the Fairfax County Public Library held the event June 26, one of the many events for Pride Month.

The event was jointly programmed by the McLean Community Center and the Dolley Madison Library, and was advertised on the library website as being open to all ages including babies, toddlers, preschoolers and school-age children. Drag Storybook Hour is an established program aligned with the American Library Association’s key action areas of diversity and equitable access, according to MCC Director Daniel Singh. He said they do not follow the established version of Drag Queen Story Hour or Drag Storyhour. “We created our version of an all-inclusive Drag Storybook Hour. One of the goals of Drag is to point out how people exist on a spectrum and are not in binaries, so we felt the open-ended framing was more useful,” he said.

Several adults and a few children attended and heard three drag queens – Persephone Rose, Kamania Sutra and Majic Dyke – read stories. Kamania Sutra also danced for the children during the first 45-minute time slot. Persephone Rose brought her stuffed dog and told the children it was a cat, according to video provided to the Fairfax Times. The second time slot was shortened and there was no dancing. Singh said that the books “selected were appropriate for story hour reading with vibrant colors, rhymes, activities – all curated by librarians “who are the subject matter experts in this area.”

“We know that there was a lot of interest in the program,” he said. “Tickets were entirely sold out within a few hours of being released to the public.” Although Singh said he was heartened by the support of parents who trust MCC curation and the approach to an inclusive community, that a few toxic folks derailed what should have been a nurturing and safe environment. “About 10 adults showed up and followed attendees arriving to and departing the event using aggressive, negative and traumatic language,” he said. He noted that 10 adults had signed up for what was a “kids-focused” event.

While a story hour may seem innocuous to some, many Fairfax County residents were unhappy with a presentation to this age group. Some even questioned whether the performers had had background checks performed. Background checks are not required of FCPL performers or volunteers because community members are not alone with volunteers, according to Jessica Hudson, FCPL director.

“In my view it is not appropriate to expose small children to this. Drag acts are a form of entertainment for adults,” said Chris Henzel, a McLean resident. “Some people have tried to frame this as a matter of individual rights, which misses the point. I’m not aware that anyone is objecting to the ‘drag queens’ right to perform for adults. I am concerned that adult entertainment is being foisted on small children and funded by Fairfax County taxpayers.” According to Singh, the artists were each paid a $300 honorarium out of the MCC budget funded by Dranesville Small District 1A taxpayers.

Drag Queen Kitty Demure, agrees that these events are not appropriate for children. “They are there for an agenda. They’re not there to read ‘Alice in Wonderland’ and just leave,” she said during an interview. “They’re there to talk about gender, being different and the whole lifestyle homosexuality, trans issues educating these kids on these issues. You’re not even supposed to take your kid that age to a Rated R movie. These are not topics that are meant for a child’s mind, they don’t even know what they want for dinner. How do they know anything about gender, sex, and sexuality?”

Persephone Rose commented on a negative reply to a tweet about the event by saying, “There are LGBTQIA+ children too. It’s important that they see they aren’t alone, there isn’t anything wrong with them, and it’s safe for other kids to be friends with them! If I had seen this kind of visibility as a kid my life would have been very different and much improved.”

Singh attended with both of his children and he said that they would have had a better time had the artists not been put in such an awkward position and if he and his children had not been “harassed by folks as we were going to my car,” he said. “The artists were amazing, it was such a lost opportunity for all the families that were present.”

“I am not aware of any incident that remotely corresponds with Mr. Singh’s version of events,” said Adrienne Henzel, who was in attendance at the events. “If he’s referring to the ladies praying the Rosary, then that’s just funny.”

However, harassment seemed to be happening on both sides as one 19-year-old McLean woman told the Fairfax Times. “I was standing in a group near some of the older ladies who had silently protested by praying the Rosary,” she said. “I asked one of the adults whether they felt comfortable with what the children had just been exposed to. In response, several attendees accused me and some of the Rosary ladies of being bigots, racists, transphobes and hateful.”

Kathleen Donoghue attended the event and said she sat in the event and prayed silently. However when she noticed that one of the children became upset when Persephone Rose called the stuffed dog a cat she said out loud, “Please don’t confuse the children!” Donoghue confirmed that she’s neither homophobic or transphobic. “I truly care about all people,” she said. “My main concern was the age group to which this event was marketed.”

“At one point a mother left with her young child apparently upset,” said Donoghue. “When another parent got up to leave I followed her out and verified that she, along with her child were visibly shaken by the ‘event’. After the first session, I briefly spoke with the performers. Our exchange was not angry or threatening. I wanted to learn and understand what they were thinking by putting on this display. Afterwards I saw Daniel Singh outside and asked him what he thought of the event. I did not know he was the MCC director. He said they really enjoyed it and when he saw the look on my face he angrily told me that if I was concerned about the well-being of children I should write to the Pope.”

Singh billed the event as one of inclusion and noted that MCC, FCPL and other county agencies offered multiple events to celebrate Pride Month. “These pride celebrations were meant to lift up and support the LGBTQ+ community,” he said. “As you know, LGBTQ+ teens are five times more likely to commit suicide because of social rejection by families/communities or because of bullying. We see our efforts as a joint path forward to prevent the trauma as being perceived as different for something that is a natural aspect of 10 percent of our population, and one that should be celebrated.”

“I have absolutely no idea why you would want that to influence your child. Would you want a stripper or a porn star to influence your child? It makes no sense at all,” Demure said in a video address to heterosexual women posted on her Instagram page. “A drag queen performs in a nightclub for adults. There is a lot of filth that goes on, a lot of sexual stuff that goes on and backstage there’s a lot of nudity, sex and drugs. So, I don’t think that this an avenue that you want your child to explore. getting them involved in drag is extremely, extremely irresponsible on your part and I understand that you might want to look like you’re with it, that you’re cool, that you’re woke, that you’re not a Nazi, that you’re not a homophobe. Honestly you’re not doing the gay community any favors, in fact you’re hurting us. We already have a reputation of being pedophiles and perverts and deviants. We don’t need you to bring your children around so you keep your kids at home or you take them to Disneyland or take them to Chuck E. Cheese.”

Thank you for writing a balanced article on this subject that does not caricature the views of the opposition.

I would feel much safer bringing my children to a drag queen story time than letting priests read to them.

Why would a storyteller argue with a child about a stuff toy being a cat when the storyteller had a stuff dog to show the child? Is that what storytelling to babies and children is about? Social construct and hidden political agenda. I hope that in the future babies and children are not taught subjects which are only appropriate for consenting adults. However, the decency of adults is always a relevant topic of today.

Why would a storyteller tell a child her dog is a cat? And have an argument with a child over it. Please leave your "Social Construct" and your "Sexual Identities" to consenting adults. Please don't harass poor innocent babies and children. You ought to know better than that. Might I suggest that you move your Drag Queen Hour to Alden Theater and charge admissions for entertainment? You’ll get a better turn out and it will be more profitable.

Why would a story book teller try to confuse a child that a dog is a cat? Children should be nurtured with loving stories and not burdened with political hidden agendas of the "Social Construct" and "Sexual Identifies." These poor innocent children were subjected to harassment by adults who should know better! Please for your PRIDE MONTH, bring it to ALDEN Theater next year and charge for your DRAG QUEEN Performance and earn money for your entertainment with consenting adults. Trickery to babies and children is a cheap trick!