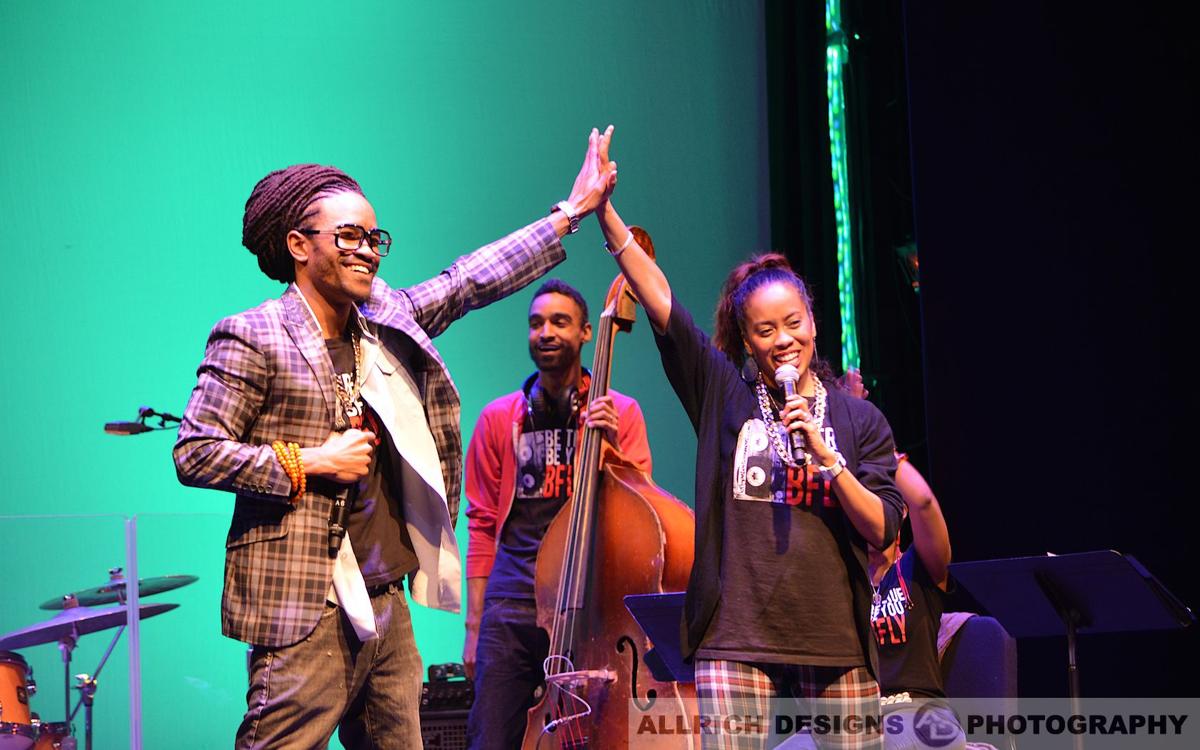 Liner Notes co-founder Paige Hernandez: “It was important for us to make sure that we could bring liner of notes to life, which means during the performance we read actual liner notes from the artists that we are covering. And that's where the name came from.” 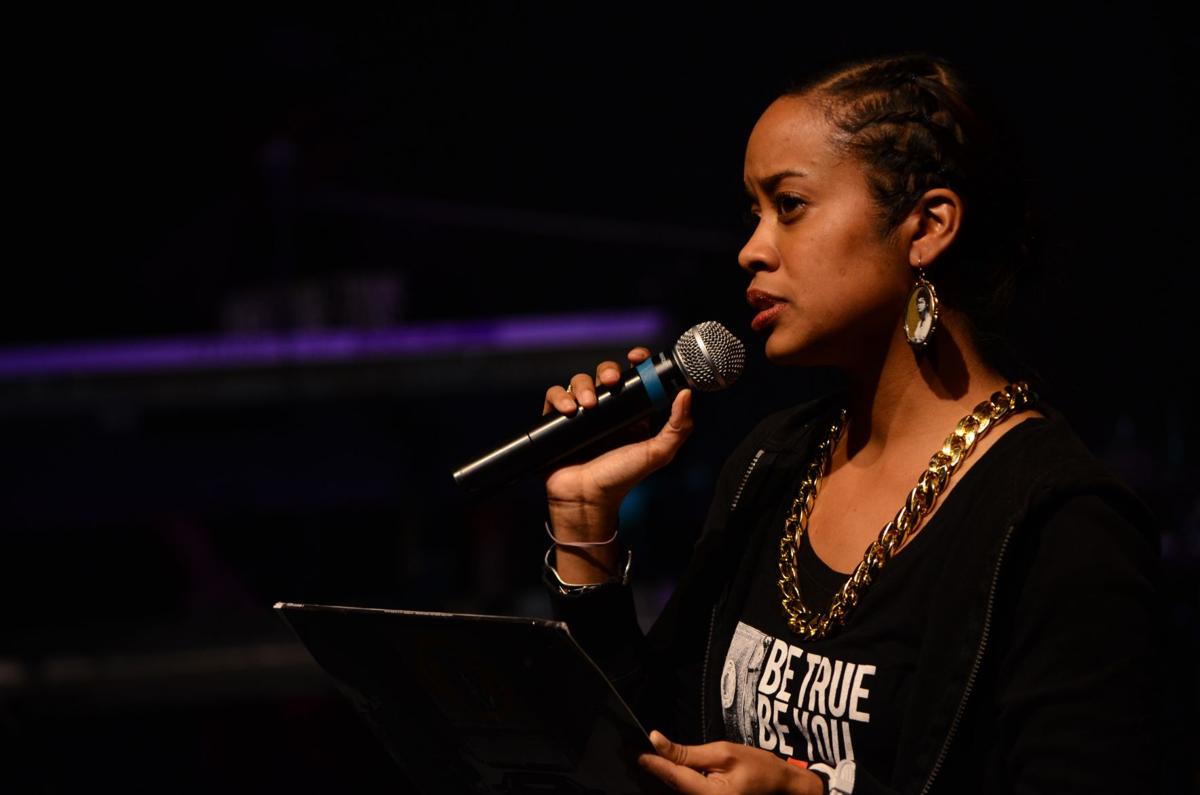 Liner Notes co-founder Paige Hernandez: “It was important for us to make sure that we could bring liner of notes to life, which means during the performance we read actual liner notes from the artists that we are covering. And that's where the name came from.”

When we get in touch with our pain and transform it into art, healing starts and change happens. Listening to the songs that inspired the Civil Rights Movement, what can we learn about the music of today? Are we healing? This is why Reston Community Center (RCC) invited the band Liner Notes to perform on Sunday, Jan. 19 as part of RCC’s three-day annual event to celebrate the birthday and life of Dr. Martin Luther King Jr.

“You'll hear music that was used in different marches and rallies, also music that was written as political expression, music that was written after tragic events. So yes, this is very specific to the Civil Rights Movement and music of the ‘60s and ‘70s,” said Liner Notes co-founder Paige Hernandez. “We also like to look at the entire kind of African American diaspora, which means there's R&B, there's African music, there's blues, there's rap. We try to cover it all because they all inform each other.”

All band members are from the DMV area and because part of their mission is to attract an intergenerational audience, Hernandez’s father plays guitar at the show. “It really is kind of a family affair,” said Hernandez, who will be the show’s narrator, “I also get to rap and perform the music that I love.” She is also the producer and director of the show: “I also help to kind of curate the playlist, which means I come up with all the music that we share; I do all of the research.”

We had this conversation over the phone:

So the first thing I would love to know is the meaning behind the name Liner Notes.

Hernandez: The Liner Notes name comes from the actual liner notes that you can find on albums, records, music, artifacts of the past, including cassettes and CDs. And it was important for us to make sure that we could bring liner of notes to life, which means during the performance we read actual liner notes from the artists that we are covering. And that's where the name came from.

For example, let's name an artist.

Hernandez: Mm-hmm, like we will be doing Marvin Gaye, “What's Going On?”

And in his liner notes from the ‘70s, Marvin speaks about why he decided to create that album and what the motivation and inspiration behind it was. And a lot of times, so much of the artist's statement is in that line or notes that get lost just because of new technology. So we really aim to look at not just the music but also the process, the thoughts, and the statements that help to inspire the actual artists themselves.

Interesting. And how did you decide to start this band?

Hernandez: I've always been a lover of music, and I married a jazz musician, who's also in the show. And he and I were just brainstorming one night and said, "How can we pay homage to the artists who came before us while also sharing just the music that we love?" And we decided to create Liner Notes, which really looks at kind of bridging the gap between generations based on hip hop's ability to sample old music and to find those intersections in a way to say that our audiences can be of all ages and all races and enjoy the music together.

So, how do you bridge the gap between all ages?

Hernandez: So, our shows are family friendly; they're appropriate. They are a lot of times tied into school curriculum because I'm also an educator.

OK. And how is it tied to the school’s curriculum?

Hernandez: Sometimes school curriculum looks at the history of music and exactly what we're doing on the 19th, which is looking at how music informed the Civil Rights Movement.

And so, looking at what teachers are using in the classroom to teach that particular unit and then making it come alive in an entertainment fashion that's interactive and that's engaging... So, for me, the ideal audience looks like students and adults and grandmothers and they can also see themselves on stage and also hear the music that they love represented. Whether they're young or old, everybody's kind of covered. The show is very intentional.

When the audience members leave the event, how do you think they will feel?

Hernandez: I think the audience will feel very moved and motivated, sentimental, as well as empowered. We've had the great fortune to have done this show, specifically Music of the Movement, several times with different venues, including the Smithsonian. And it's really remarkable just how much it brings the audience together. There's an incredible sense of community and empathy after the performance. So we hope that the rest of the audience will feel the same way.

Listening to music of the Civil Rights Movement, what have we learned in your opinion? What do we still need to learn?

Hernandez: I think, unfortunately, it feels like a cycle. Music from the past that's based in struggle and oppression is happening today based on different types of struggles and oppression.

I think one thing that is fantastic about it is just the level of artistic expression that artists have. They're able to really be a sort of cushion, platform, all kinds of things for people to really look to as an outlet in times of strife. And unfortunately, what I don't think we've learned is how powerful music can really be. I think if we listen to a lot of the messages within music from prior generations, it can kind of point to what needs to be overcome, what needs to be worked on more, and how we cannot repeat the cycle. But the issue is, you have to make the choice whether or not to listen to it and how it informs you. So, it still always goes back to the listener.

‘Liner Notes: Music of The Movement’