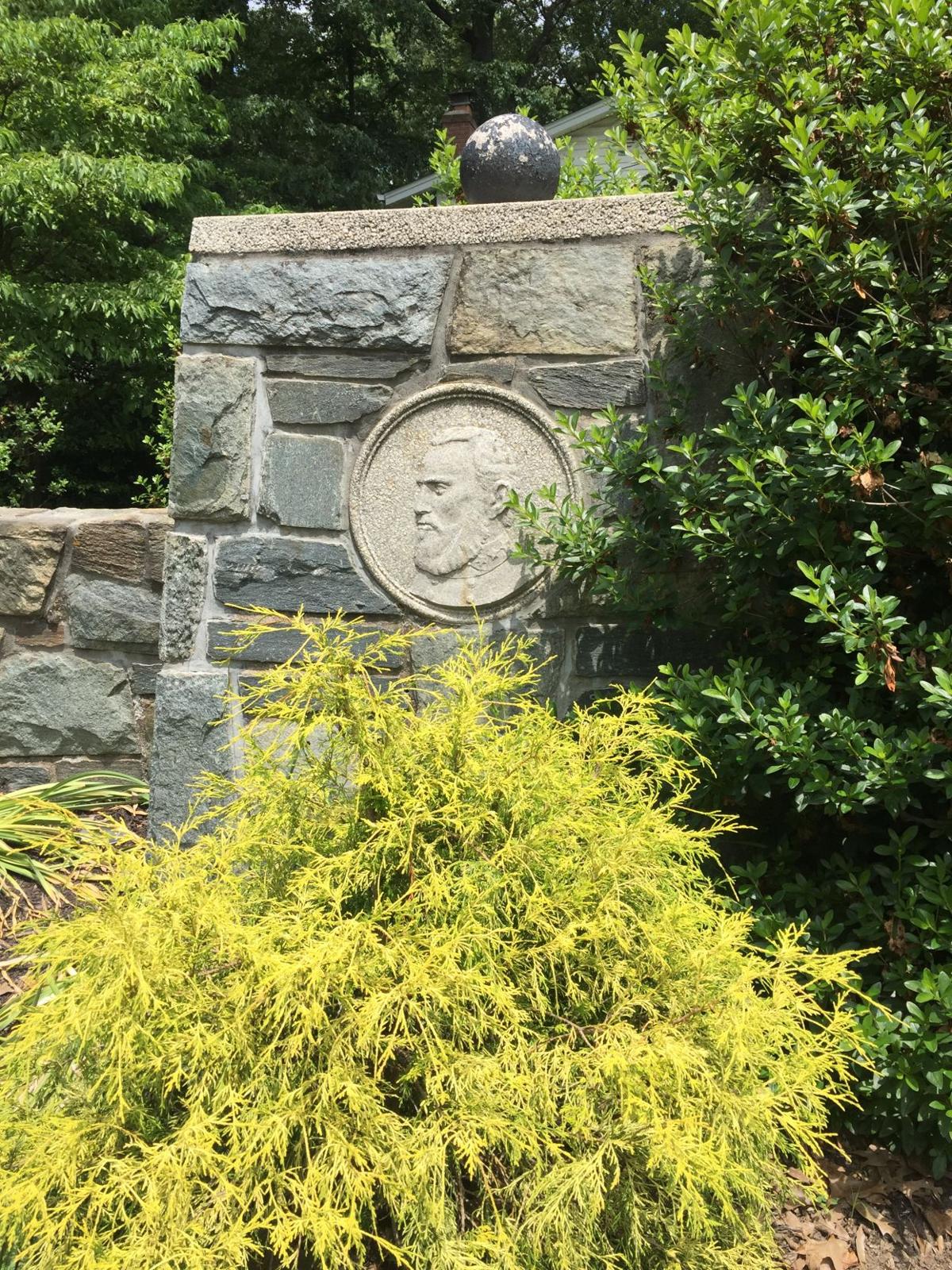 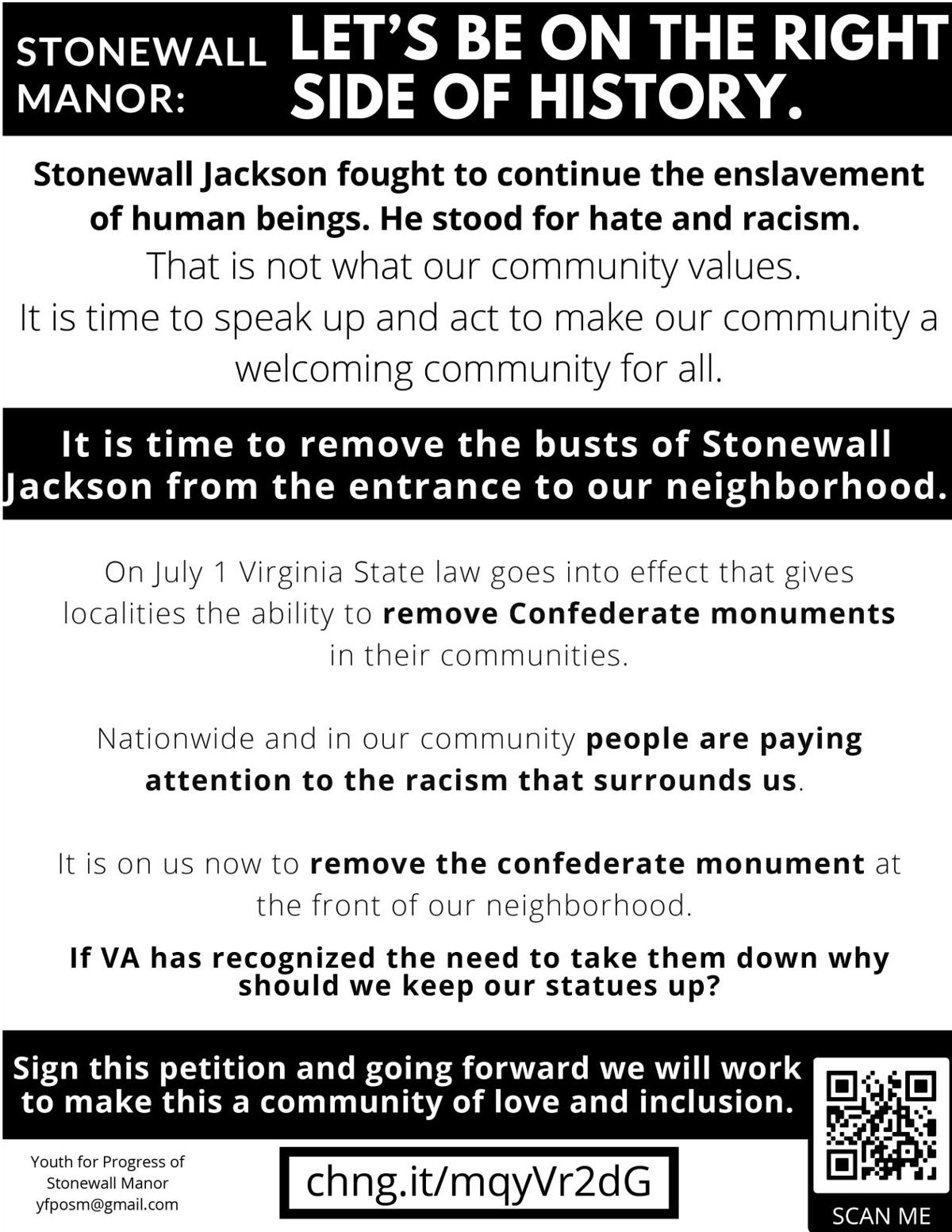 Flyer created by Simpson and McCabe, which was passed around to 430 houses in the neighborhood.

Correction: Prior story stated that the original deed said homeowners could not sell their houses to people of color. There is no proof of this.

A new discussion has recently emerged around the country following the recent protests against police brutality: whether or not statues and streets named after Confederate soldiers from the Civil War should be removed or renamed. Currently, this discussion is happening in a Vienna, Va. neighborhood.

Neel Simpson, a William & Mary university student, has grown up in this neighborhood his entire life, but is actively trying to change its name, as well as remove the depiction of Jackson from the entrance walls. “Ever since we learned about Stonewall Jackson,” he says, “it was just weird to me that we had a neighborhood named after someone who lost in the war and fought on the ‘bad side,’ as we learned.”

Carolina McCabe, a student at Tufts University in Boston, also grew up in the same neighborhood. “After doing research, I saw that it was something that was put up not to honor the past, but to seclude the present,” she says.

“This neighborhood, being built in 1963 in this time of such tension, to honor Stonewall Jackson and to create this all-White neighborhood, and to see that this lasting legacy lives up until 2020, is quite shocking,” says McCabe.

Both of the 20-year-old’s families are on the neighborhood board and have tried to get the name changed in the past. “People have defended Stonewall Jackson by saying that he taught his slaves how to read and he took him to church, ignoring the fact that he still owned slaves,” says Simpson.

However, one member of the neighborhood, who requested anonymity in discussing the issue, says that the idea of changing the names makes them sad. “I have never considered the little faces on the walls as a monument,” they said. “Since our ‘entrance walls’ are not even the way most of us enter the neighborhood, I did not even see them until months after I bought my house.”

McCabe says that students who go to Thoreau Middle School have to pass by the walls every day.

Last Monday, a group of students including Simpson and McCabe joined together as “Youth for the Progress of Stonewall Manor.” They created a flyer that called for the removal of the busts and the renaming of the community and delivered about 430 copies around the neighborhood.

The idea caught on.

“People started reaching out to us to see if they could spread flyers in their own neighborhoods,” says McCabe. They created a change.org petition in support of their ideas. As of June 17, the petition has over 2,700 signatures.

The students explain that many adults in the neighborhood have tried to make these changes in the past, but they’ve always encountered the same barrier: the wall with the bust of Stonewall Jackson is on private property, even though it’s upkept by the neighborhood gardening club and is community funded.

A community member, who wishes to remain anonymous, said that they’ve been happy to volunteer to upkeep the wall. “I kept the walls for 20 years, planting flowers for all seasons,” they said.

But Simpson and McCabe say that they’re speaking out for the silent majority. Last summer, the community had a forum regarding this issue, and a descendant of General Stonewall Jackson Skype-d in to say that he did not want the community to honor the history of his ancestor. Other speakers included representatives from the NAACP and Stonewall Jackson historians. “But because it made people too uncomfortable, or ‘disrupted the harmony’ of the neighborhood, those efforts kind of died down,” explains McCabe.

The two students have received emails from older members of the community, calling them “iconoclasts,” comparing them to ISIS and the Taliban, and saying that the neighborhood was more “loving and including” in the 1970s.

Simpson explains that he doesn’t agree with people who argue that the name and images should be kept to honor history. “Stonewall Jackson wasn’t born here, he didn’t die here, he never came to this area,” he says. “On top of that, the neighborhood was built in 1963, a hundred years after the civil war.”

Governor Northam recently signed the Confederate monuments bill, meaning that starting on July 1, localities will have the ability to remove or relocate monuments in their community as they see fit.

“We’re realizing that this is our opportunity to make change in our community as our nation is changing,” says McCabe. “I think it’s really sad to see the minority that is resisting this change. But I’m hopeful with the majority that’s coming to realize that their voice is crucial in this moment.”

Simpson says that “it’s not appropriate for people to just sit around and say, ‘we’re going to wait for people of color or the African-American community to stand up and say they’re uncomfortable.”