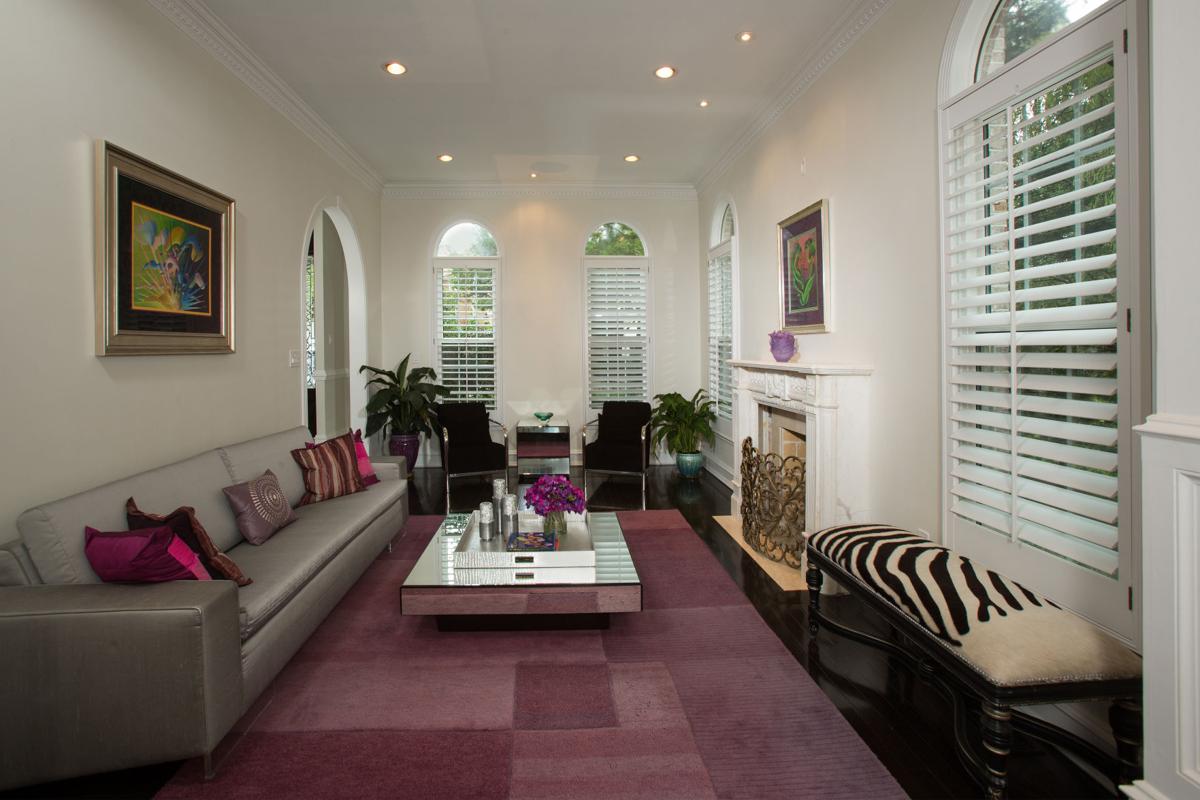 National Chrysalis Award. Michael Nash reinvigorated the interior of a circa-1990's home in McLean starting from the front foyer. To endow the flooring with a bright, seamless look, hairline grouting was applied to 20” x 20” crystal marble tiles. On the frotn door, a basket rope wrought iron railing replaced the wooden original on the front door. In the foyer, white staircase risers contrasting with dark stained treads establish the new interior's “transitional style”. A suspended crystal chandelier at the top of the stairs draws the eye in and up. 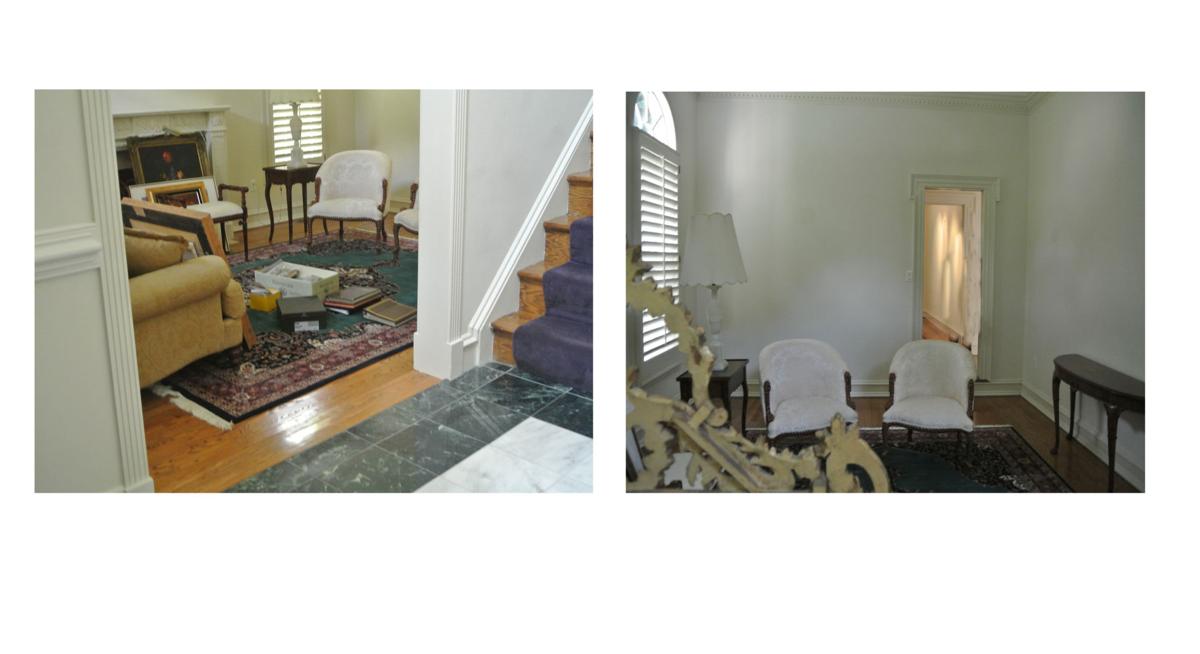 George and Rima Bitar had spent years looking for a larger house with a pool their growing family could enjoy long into the future.

“After extensive searching, they finally found a property with many of the desired components,” explains Sonny Nazemian, president and founder of Michael Nash Kitchens and Homes. “Unfortunately, the first floor rooms weren't configured to their needs. The kitchen was dysfunctional and sight lines from family room to pool were blocked; the interior was dark and dated.”

After the Bitars met with Nazemian, a vision soon emerged.

“There was a great view of the pool from the rear of the house,” Rima says. “But from the original foyer, one entered a small living room on the left -- which, in turn, revealed a doorway on the back wall linked to a rear office with a bay window. A powder room in between flanked right. Overall, the left side of the house was too dark from front to back. Plus, we didn't want a first-level home office, and the powder room was in the wrong place.”

The couple had already spoken with several contractors, but none seemed to see the home's systemic flaws as anything more than several rooms needing a fix-up.

“They didn't grasp the big picture,” Rima recalls. “One wanted to start with the kitchen and leave the powder room for a future date. Another had ideas for the foyer. No one seemed to recognize our requirements. We were looking for someone with seasoned experience who could help us completely reinvigorate the interior.”

As such, Nazemian came as a breath of fresh air.

“Sonny got our vision,” Rima says. “For instance -- he recognized immediately that we could easily find a more suitable location for the powder room because we already had plumbing routed to an unused wet-bar situated in the family room.”

The build-out of the new powder room footprint would be comparatively simple. More importantly, removing the old one would allow the remodeler to reconfigure the home's entire left side from front to back.

From the start, Nazemian conceived the front-to-back space on the home's left side as a “great room” that would feature two well-delineated activity zones: up front, a formal salon with a fireplace accessed from the foyer; to the rear, a music room where Rima would keep her classical piano.

Meanwhile, the entrance from the foyer has been widened and changed to an arch, which reiterates existing window shapes. Fluted mullions, trimming the arch, provide an elegant profile reinforced by fine detailing throughout. The new flooring is wide-plank cherry wood with espresso finish. In the back half of the room (next to the piano), a “built-in” cadenza speaks to the room's very particularized design sensibilities.

“We found the green onyx, featured in the cadenza backsplash, while shopping for kitchen counters in a stone center,” Rima recalls. “I told Sonny I'd like to see it incorporated into the interior in some way, and he showed me how it could be designed-in to a new serving station. That's the kind of inspired collaboration that occurred throughout this project.”

The fundamental challenge within the two-level, rear-facing family room was several round, fluted pillars, which were used as structural supports. The pillars were 1.5 feet in diameter and topped with florid Corinthian caps. In many parts of the room, they were squarely placed in the middle of the potential sight lines, linking a quiet seating area to the lovely pool. The columns also obstructed views between the kitchen and the family room, which features a dramatic two-level fireplace.

“Rima wanted a softer, more cohesive interior,” Nazemian says. “Finding ways to remove existing columns and open sightlines was part of the solution -- but she also wanted interior elevations that would support a subtler interplay of tones, colors and textures. The stacked stone fireplace couldn't be part of this picture.”

To make sense of the new palette, Nazemian installed new structural supports that create views in two directions. The square narrow-gauge columns introduce a discrete design element that is developed throughout the makeover. The fireplace was resurfaced in gray striped porcelain tile; the recessed niche over fireplace was designed to accommodate a flush-mount television.

“Sonny asked me if I wanted the color undertones to be cool or warm,” Bitar remembers. “The cooler undertone I chose allowed me to select brighter colors as accents for some accessories -- but the compositional balance is well-maintained.”

In the kitchen, problems were manifold. The cooktop island was not only in the wrong place, but also presented a safety hazard in a household with small children. The space was not well-organized relative to work triangles, either. Storage was limited. Overall, the room was too dark; the HVAC bulk heading created the appearance that the ceiling was too low.

As a remedy, the design team moved the cooktop range to a back wall and installed a new exhaust fan hood above. By rerouting the HVAC, the wall surface needed to accommodate taller glass-front cabinets was formed.

With the sink relocated under a bay window, the stovetop put in an L-shaped counter configuration and the foodprep island placed in a pivot from either station, the new kitchen's primary work triangle has greatly facilitated meal preparation and clean-up.

For the interior design, the quartz, top backsplash and white, marble counter-surface offer a balanced contrast to the black, walnut counter-base and espresso-finish flooring.

But a visit to the house begins at the front door.

To set the appropriate welcoming tone, Nazemian began conceptualizing the renovation from the foyer. To assure the flooring with a bright, seamless look, hairline grouting was applied to 20-by-20-inch crystal, marble tiles. A basket rope wrought-iron railing replaced the builder-grade wooden original.

White staircase risers contrasting with dark, stained treads establish the new interior's “transitional style.” The suspended crystal chandelier at the top of the stairs draws the eye in and up.

“There's such a wonderful play of light everywhere,” Rima says. “Sonny really understood what we wanted, and we're very pleased with the results.” The project later received a Chrysalis award for best Whole-House Remodel as well as local and regional “Contractor of the Year” (COTY) awards from the National Association of the Remodeling Industry (NARI).

John Byrd has been writing about home improvement for 30 years. He can be reached @ 703-715-8006, www.HomeFrontsNews.com or byrdmatx@gmail.com. Send photos of interesting remodeling projects to: b2b@homefrontsnews.com .