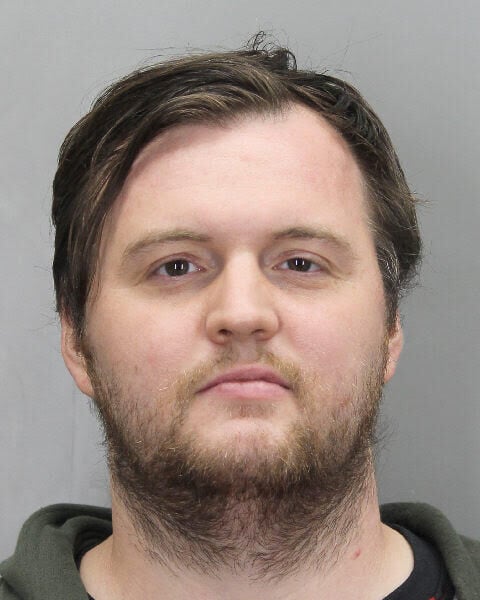 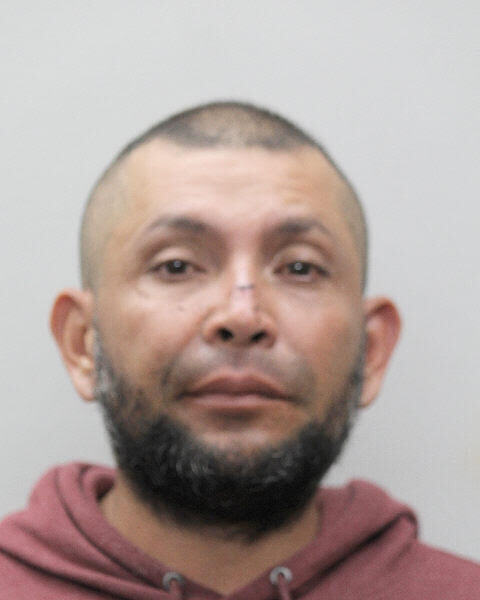 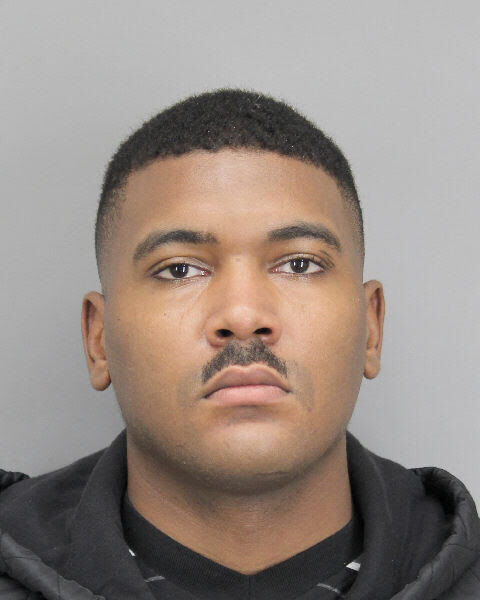 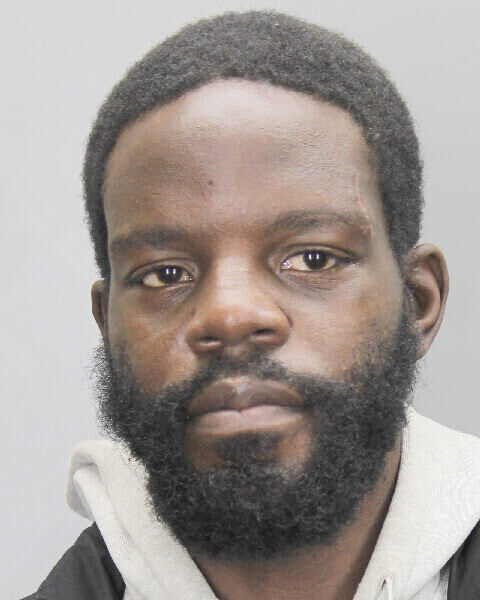 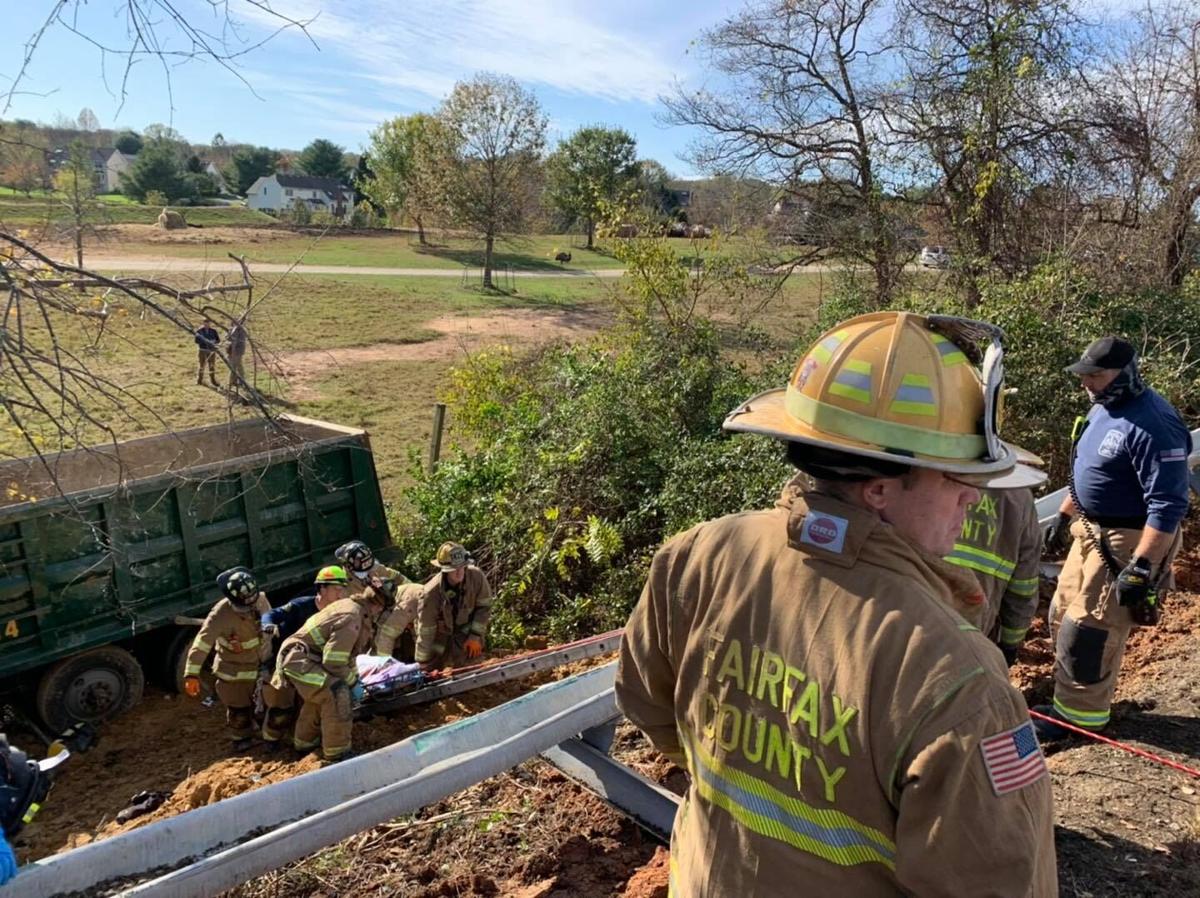 Fairfax County Fire and Rescue crews responded to Hunter Mill Rd. and Water Falls Lane Nov. 3 at approximately 1:18 p.m. for a dump truck that rolled down an embankment. Technical rescue resources/techniques were used to get the patient up the hill to the ambulance. They were transported to the hospital with non-life threatening injuries. 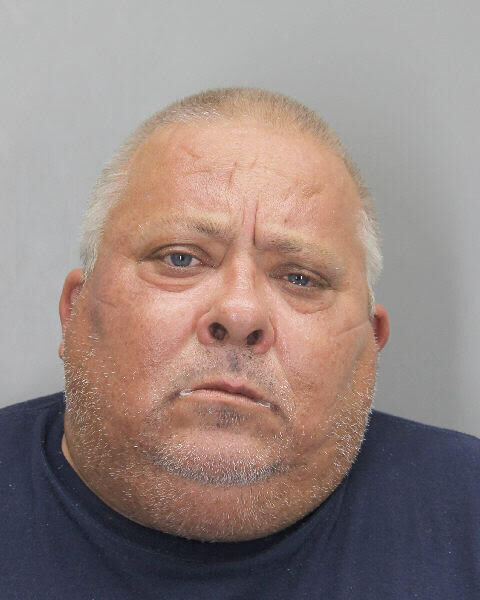 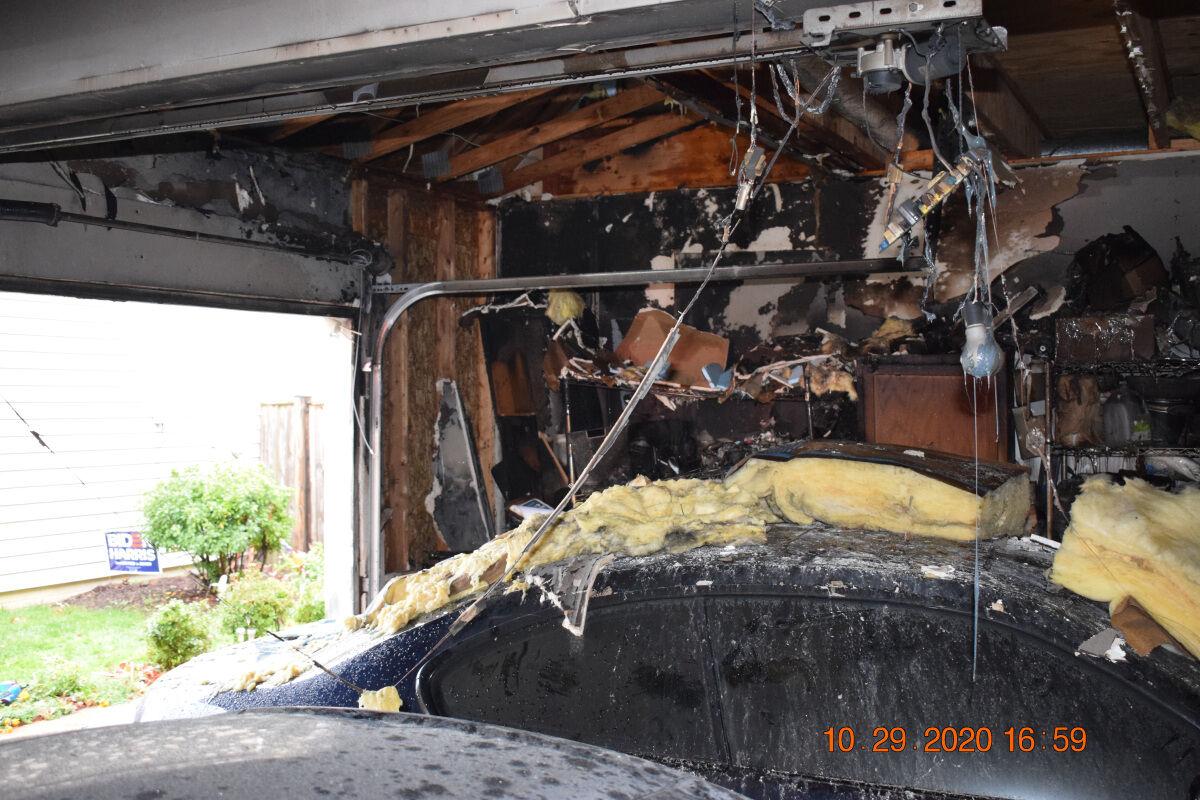 Fire  damage in the garage of the house in Kingstowne. 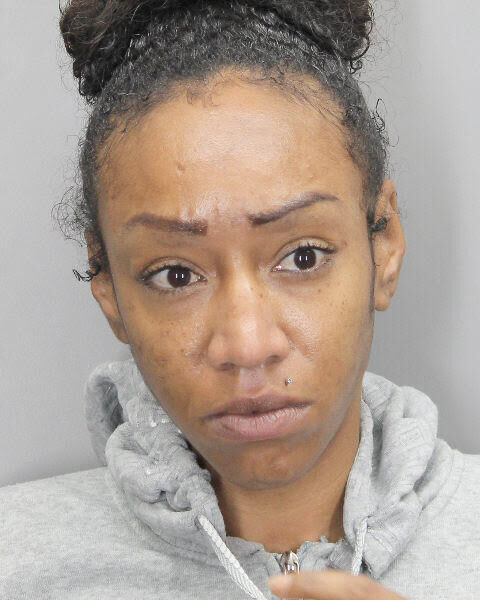 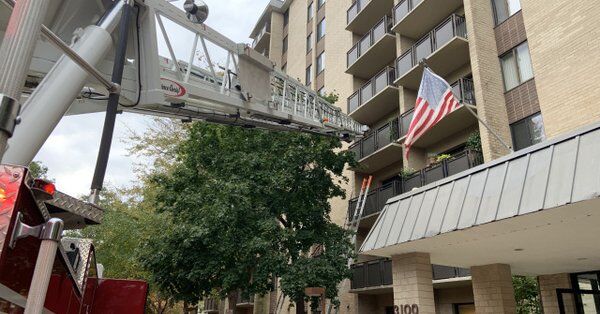 The ladder from the ladder truck extends into the third-story apartment. 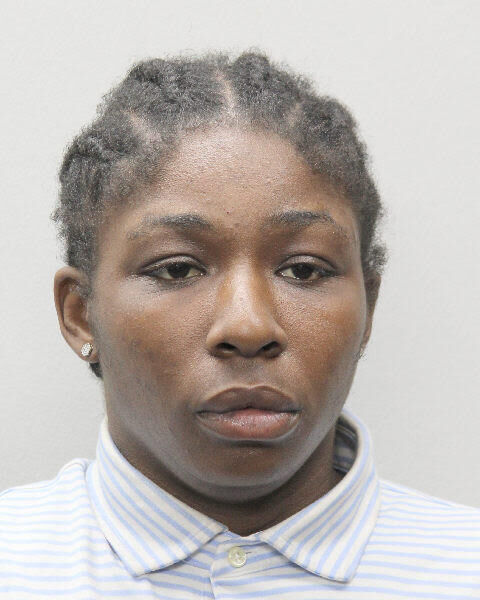 Units were dispatched to an apartment complex for a fire alarm activation Oct. 31 at 3:59 p.m. The building is located in the 3100 block of South Manchester Street in the Seven Corners area of Fairfax County.

Crews arrived on the scene of a 10-story, high-rise apartment building and discovered a fire in a third-floor apartment. The incident was immediately upgraded to an apartment fire. This brought additional units from Fairfax County Fire and Rescue Department, Arlington County Fire Department, and the City of Alexandria Fire Department. Crews quickly extinguished the fire. There were no reported civilian or firefighter injuries.

No occupants were home at the time of the fire. A resident of the building activated the building’s fire alarm system. The apartment did not have any working smoke alarms.

Fire Investigators determined the fire was accidental in nature and started in the dining room. The cause of the fire was an overloaded, multi-plug adapter.

Four occupants were displaced because of the fire. Red Cross assistance was offered and declined. Damages as a result of the fire were approximately $27,500.*

*The property loss reflects the damage sustained in the fire unit. Several other areas of the building sustained water damage.

Detectives from the Fairfax County Police Department Major Crimes Bureau are continuing to investigate a fatal shooting that occurred Oct. 30.

Officers responded to the Diamond Lounge at 7203 Little River Turnpike around 2:12 a.m. for a reported shooting. Upon their arrival, officers found Samuel Njikang, 27, of Woodbridge, suffering from an apparent gunshot wound to the upper body. Njikang was taken to the hospital where he succumbed to his injuries.

Preliminarily, detectives believe Njikang was involved in an altercation with a group of people in the parking lot after leaving the lounge. During the course of the altercation, he was shot.

The Office of the Chief Medical Examiner will conduct an autopsy to determine the cause and manner of death. This is an active investigation and detectives continue to conduct interviews, process evidence, and canvass the area for witnesses.

Victim specialists from the Major Crimes Bureau’s Victim Services Division have been assigned to ensure the victim’s family is receiving appropriate resources and assistance.

This is the 11th homicide year to date in Fairfax County.

Units were dispatched for a reported house fire in the 7500 block of Cross Gate Lane in the Kingstowne area of Fairfax County Oct. 29 at approximately 3:34 p.m.

Crews arrived on the scene of a two-story, single-family home with fire showing from the garage. They worked quickly to extinguish the fire. There were no civilian or firefighter injuries reported.

One occupant was home at the time of the fire. The homeowner heard a loud bang and, upon further investigation, she observed fire coming from the exterior garage door. She then self-evacuated and called 9-1-1. Smoke alarms were working and sounded after the fire was discovered.

Fire investigators determined that the fire was accidental in nature and started in the attached garage. The cause of the fire was an electrical event involving an extension cord.

Two occupants have been briefly displaced because of the fire. Red Cross assistance was offered and declined. Damages as a result of the fire were approximately $95,000.

Detectives from the Fairfax County Police Department Major Crimes Bureau continue to investigate after a man and woman were found dead at a townhome in Centreville.

Officers responded to the 14400 block of Black Horse Court just prior to 10 a.m. Nov. 1 for a reported shooting.

Preliminarily, detectives believe Cardona shot Renderos as she arrived to the home before shooting himself. Renderos and Cardona were married but believed to be separated.

The Office of the Chief Medical Examiner will be conducting autopsies to confirm manner and cause of death.

This is the 12th homicide year-to-date in Fairfax County.

The driver continued a short distance, drove onto a sidewalk and hit a curb before coming to a stop.

Cristian Antonio Santos-Franco, 40, of Chantilly, was charged with DWI, speed to elude, and driving without an operator’s license.

The victim was treated for injuries that were not life threatening.

Curtis Penn, 27, of Fort Belvoir, was charged with assault, abduction, strangulation, and preventing a 911 call.

On December 1, the City of Alexandria will resume enforcement of state vehicle safety inspections, which has been temporarily suspended since August.

Inspection stations are open, and the City encourages vehicle owners to stay current on inspections while following COVID-19 guidelines like staying 6 feet apart from others, disinfecting commonly touched surfaces, and washing hands with soap and water or using hand sanitizer with at least 60 percent alcohol. During November, police and parking enforcement officers will place reminder notices on vehicles with expired safety inspections.

As previously announced, the payment deadline for the City’s personal property tax (car tax and business property tax) for tax year 2020 has been extended by City Council from October 5 to December 15. Enforcement of 2021 tax registration and new (red) residential parking permits will begin on December 16. Vehicles that are not currently registered for the car tax, or are parked in residential permit zones without a current (blue) parking permit, may still be ticketed.

All other normal parking restrictions remain in effect. Motorists should also be aware that they may be cited by other state or local police and sheriff’s departments in other jurisdictions for missing or expired inspections or registrations, even while Alexandria suspends enforcement. Owners of private parking facilities, such as condominiums and apartments, may also enforce their own parking regulations.]

A group of three people stole merchandise from Spirit Halloween at 5800 Cross Roads Center and left in a 2007 Ford sedan.

Officers stopped the sedan Oct. 29 at 7:22 p.m., recovered the stolen merchandise and learned the sedan was reported stolen.

Officers were checking a burglary alarm at the Virginia DMV located at 6306 Grovedale Rd. Oct. 25 at 5:03 a.m. and discovered the glass front doors had been smashed.

Anthony K. Smith, 30, of Springfield, was found inside along with extensive damage to the interior of the building. Smith was charged with burglary and destruction of property.

Manassas man arrested after barricading himself inside home

At 7:10 p.m. Oct. 28, a woman reported an acquaintance forced himself into her home in the 6900 block of Bethnal Court while armed with a knife and threatened to harm himself.

The man barricaded himself inside the home for several hours while officers employed de-escalation techniques.

Gregory Scott Burgess, 50, of Manassas was taken to the hospital with a self-inflicted injury that was not life threatening. He was charged with burglary and violation of a protective order.