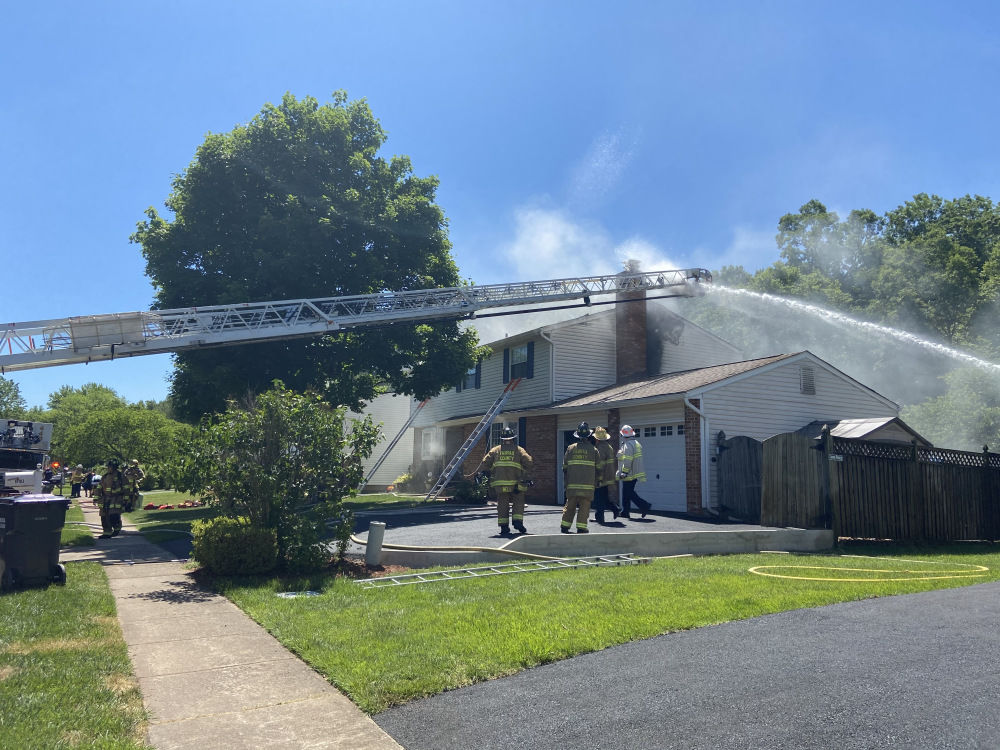 Firefighters at the scene of a house fire in Centreville. 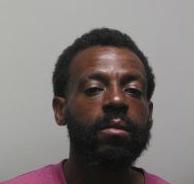 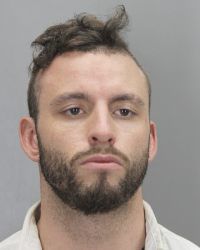 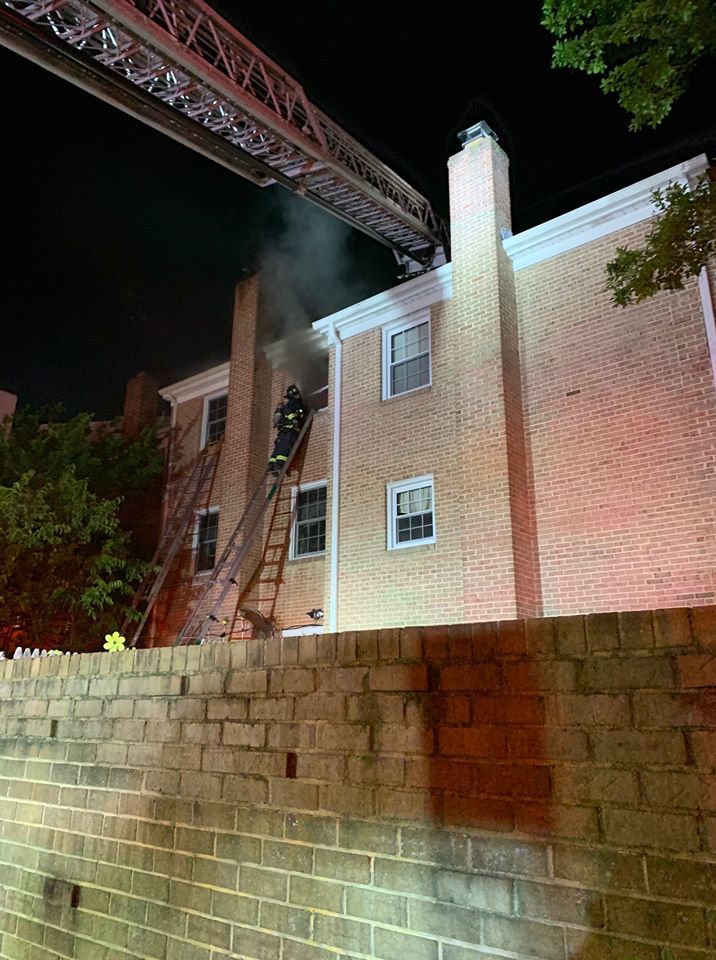 A firefighter checks the second story at the scene of a townhouse fire. 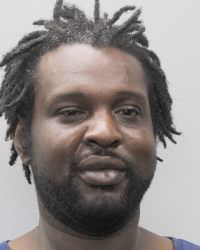 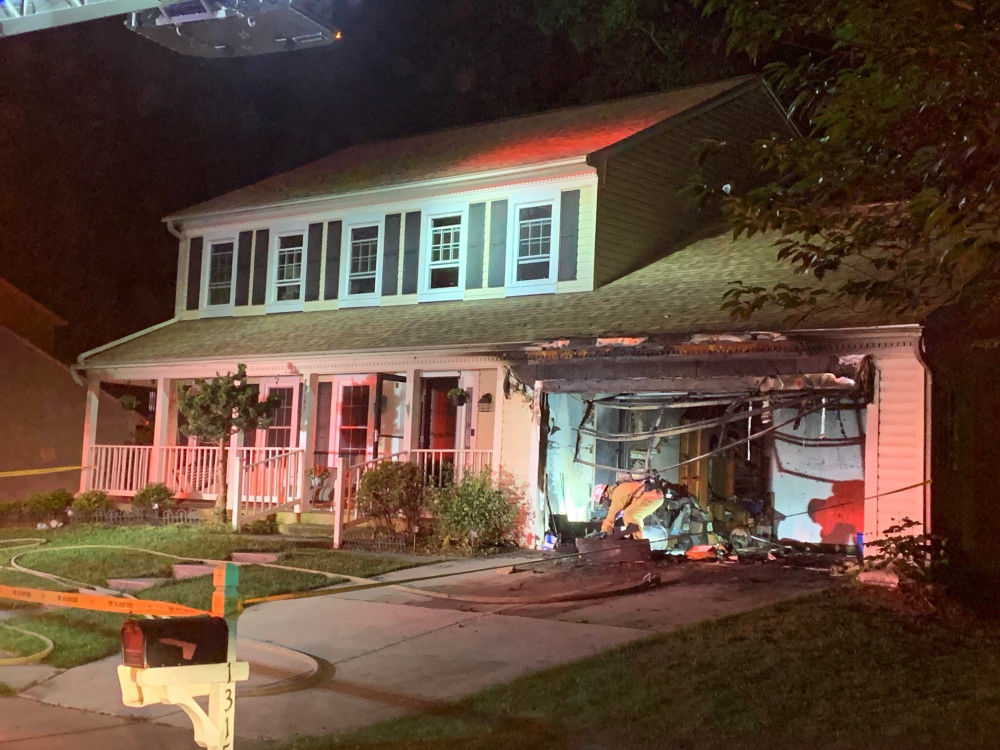 Damages to the garage of a Franklin Farm home. 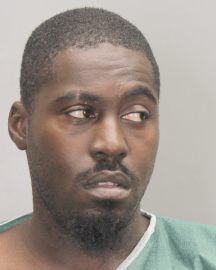 Units were dispatched to a reported house fire in the 15100 block of Olddale Road in the Centreville area of Fairfax County June 12 at approximately 11:15 a.m.

Units arrived on the scene of a two-story single, family home with smoke and fire visible from the roof. Crews quickly extinguished the fire. There were no reported civilian or firefighter injuries.

One occupant was home at the time of the fire. A passerby noticed smoke coming from the roof area. The occupant was alerted by the passerby, safely evacuated the home and 9-1-1 was called. There were working smoke alarms, however, they did not initially sound due to the location of the fire.

Fire Investigators determined that the fire originated was accidental in nature. The fire started from an abnormal electrical issue with the cable communication line that ran underneath the vinyl siding from the first floor to the second.

Two occupants were displaced because of the fire. Red Cross assistance was offered and accepted. Damages as a result of the fire were approximately $63,000.

A 17-year-old has been charged after detectives linked him to the June 23, 2019 murder of Jose Lorenzo Guillen Mejia. Guillen Mejia’s body was found by officers investigating the report of gunshots around 1:45 a.m. near a walking trail between Hunters Woods Plaza and Breton Court in Reston. An autopsy later revealed he died from multiple gunshot wounds.

Detectives from our Major Crimes Bureau identified the suspect following a comprehensive investigation and obtained a felony petition for first degree murder on June 9, 2020 after consulting with the Office of the Commonwealth Attorney. The suspect, who is already incarcerated at the Fairfax County Juvenile Detention Center for an unrelated offense, was served this morning and remains held without bond.

Officers were called to Nalls Road and Old Mount Vernon Highway in Alexandria June 10 at 7:07 p.m. after a man was seen running on the street naked and acting erratically.

Brandon Thurman, 35, of Alexandria, was arrested and charged with drunk in public.

A man has died as a result of injuries from a crash that occurred June 11 around 9:48 p.m.

Detectives from the Crash Reconstruction Unit have preliminarily determined that two men were crossing Lee Highway at the intersection of Centreville Farms Road. The driver of a 2004 Pontiac Vibe was traveling southbound on Lee Highway when he struck the two men that were in a crosswalk. The driver remained on the scene and is cooperating with detectives. Both men were taken to local hospitals. Rafael Raymundo Bernal, 24, of Centreville died from his injuries. The second man suffered injuries that were not life-threatening. Preliminarily, speed does not appear to be a factor for the driver. Alcohol may be a factor for the pedestrians. The investigation is ongoing.

This is the 11th pedestrian fatality in the county to date in 2020.

Officers attempted to stop a 2014 Nissan Juke for a traffic violation near Beulah Street and Kingstowne Village Parkway June 11 at 4:25 a.m.

The driver refused to stop resulting in a pursuit. The driver eventually stopped and was taken into custody. Jeremy Runaldue, 27, of Alexandria, was charged with speed to elude, reckless driving and driving without a license.

Tow Truck Driver Dies After Being Struck on the Beltway

Trooper L. Vajglova, of the Virginia State Police, responded to a multi-vehicle crash on I-495, less than a mile north of Route 236 in Fairfax County June 8 at 10:22 p.m.

A 2015 Ford Edge was traveling south on I-495 when it was struck in the rear by a southbound 2013 Honda Pilot. The impact of the crash caused the Honda to run off the right side of the highway and strike a tow truck. The tow truck, with its amber flashing lights activated, was stopped on the shoulder to assist a disabled motorist.

The tow truck driver, Derrick A. Marbury, 49, of Alexandria, was outside his vehicle when it was struck and as he ran to get away from the crash, he was struck by a 2015 Mercedes-Benz M35. The towing operator died at the scene.

The Virginia State Police Fairfax Division Crash Reconstruction Team responded to the scene and is assisting with the ongoing crash investigation.

Units from Fairfax County Fire and Rescue and the City of Alexandria Fire Department were dispatched for a reported townhouse fire with a report of an occupant trapped in the 4500 block of Airlie Way in the Annandale area of Fairfax County June 14 at 9:27 p.m.

Units arrived on scene of a two-story, middle unit townhouse with fire visible from the second floor. Crews worked simultaneously to locate the missing occupant and extinguish the fire. Firefighters quickly located the occupant on the second floor and removed her from the townhome. She was transported to a hospital with life-threatening injuries. There were no firefighter injuries reported.

Four occupants were home at the time of the fire. One occupant was alerted to the fire by a working smoke alarm. The occupant attempted to rescue another occupant unsuccessfully.

The cause of the fire is currently under investigation.

Five occupants were displaced because of the fire. Red Cross services were offered and accepted. Damages as a result of the fire were approximately $20,000.

The driver refused to stop resulting in a pursuit. The driver hit a parked vehicle, kept driving and a decision was made to terminate the pursuit. A lookout was provided, and the driver was arrested with the assistance of the Virginia State Police. Karim Clayton, 42, of Washington, D.C., was charged with grand larceny, larceny with intent to sell or distribute, speed to elude, hit and run and driving without a license.

Units were dispatched for a reported house fire in the 13100 block of Rounding Run Circle in the Franklin Farm area of Fairfax County June 13 at approximately 9:46 p.m.

Units arrived on the scene of a two-story, single family home with fire visible from an attached garage. Crews were able to quickly extinguish the fire. There was no extension of the fire to the interior of the home. There were no reported civilian or firefighter injuries.

Four occupants were home at the time of the fire. The occupants noticed smoke and fire coming from the garage. One occupant attempted to extinguish the fire without success.

Fire Investigators determined that the fire was accidental in nature and started in the garage. The fire was caused by improperly discarded fireworks.

Four occupants were displaced because of the fire. Red Cross assistance was offered and declined. Damages as a result of the fire were approximately $80,000.

Fairfax County Fire and Rescue urge all residents to treat the disposal of used fireworks the same as fireplace ashes. Please place into a metal container, douse with water, place a metal lid on top and place container away from the house.

This is the second house fire this year caused by the improper disposal of fireworks. The first was on April 6.

List of days, times and location are below. To register to donate, please go to the https://bit.ly/2XMPX6A.

A man assaulted a woman and was acting erratically while brandishing edged weapons inside a home in the 9500 block of Hagel Circle in Lorton June 13 at 10:54 p.m.

The man refused to let the occupants leave the home and he refused to come outside but eventually complied and was taken into custody.

Jamie Holmes, 32, of Lorton, was charged with four counts of abduction, simple assault against a family member and violation of protective order.

Officers were called to Bill Page Honda at 6715 Arlington Blvd in Falls Church June 12 at 4:45 p.m. for a man who assaulted a woman, was screaming at employees and acting disorderly.

The man, Gregory Sharp Jr., 34, of Washington, D.C., assaulted an officer while he was being taken into custody. Sharp was charged with disorderly conduct, assault on a law enforcement officer and obstruction of justice. There were no reported injuries.