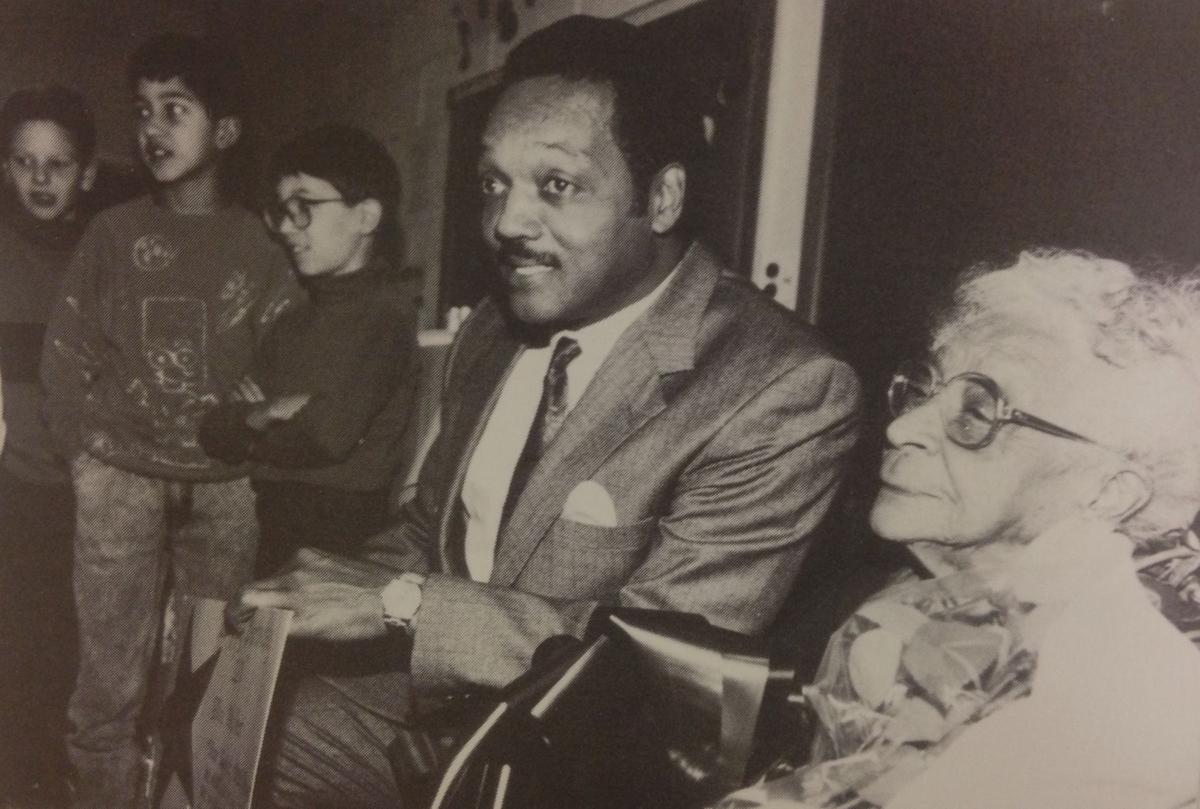 For her 110th birthday during the 1990-91 school year, SVES staff asked Miller to give them a wish list. On that list Miller included Jesse Jackson as someone she would love to meet. She got her wish. 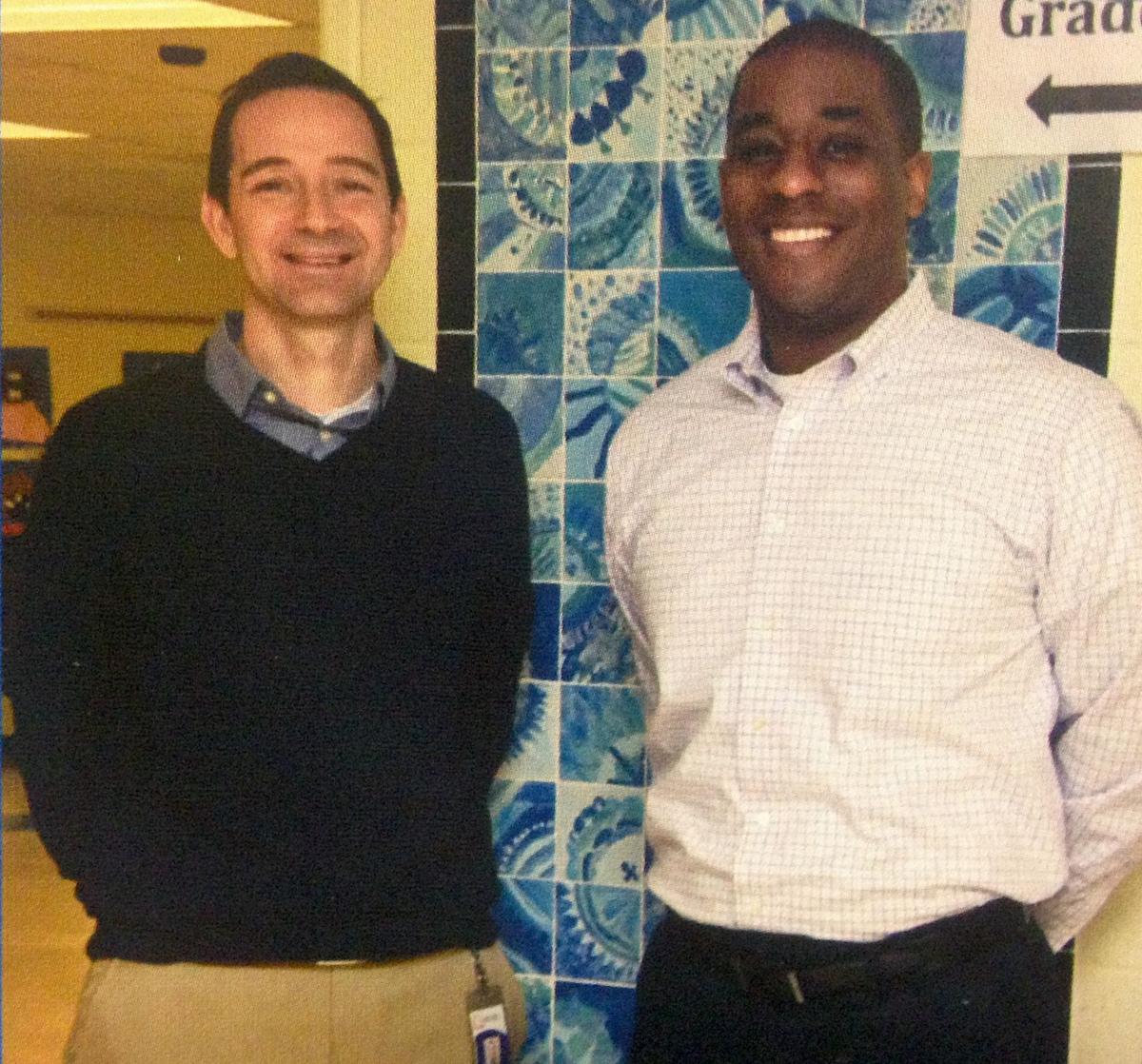 For her 110th birthday during the 1990-91 school year, SVES staff asked Miller to give them a wish list. On that list Miller included Jesse Jackson as someone she would love to meet. She got her wish.

When Sunrise Valley Elementary School (SVES) was established in September 1978, it was still under construction. Students were initially bused to South Lakes High School to attend classes. The school officially opened its doors on Sept. 4, 1979 with Principal William “Bill” Berkeley Martin welcoming the first 600 students as they walked through the front entrance, according to the SVES website.

During the school’s first year in operation, Fairfax County had not fully anticipated the large number of students residing within the school boundaries, and immediately had to build a temporary ten-classroom annex to accommodate them.

Only five years ago was the annex permanently removed while SVES underwent renovation, according MaryAnn Chung, SVES’s former principal.

While Chung was principal, from 1983-1998, SVES had formed several partnerships.

Dulles Airport Marriott approached the school offering their services. The hotel catered refreshments for principal coffees, volunteer teas, back-to-school teacher breakfasts, and more. SVES students would entertain Marriott guests by singing in the hotel lobby. Thanks to AT&T and a few dedicated parents, SVES was the first Fairfax County elementary school to have a phone in every classroom. AT&T also establish video conferencing between SVES and other schools.

The SVES staff and Marymount University initiated a partnership named the Professional Development Academy at the school. Second career students earned master’s degrees in teaching while working closely with SVES teachers and students. “Things such as classroom management, establishing classroom routines, and reporting to parents can’t be learned from books,” said Chung. Perot Systems employees made a difference for many students. Weekly, 16 employees came to eat lunch, read, and help students with homework while working closely with the guidance counselors.

Today Chung, whose children went to SVES and now has grandchildren attending the school, sees the school community as instrumental in the its success. “It is such a strong school, because it has such tremendous community support and it continues to attract faculty and staff of consistently high quality,” said Chung. “When I returned to SVES with my granddaughters, I was so happy to see parents and caregivers just as enthusiastic and involved as they were in the past, and teachers working just as hard. The community outreach is exceptional!”

It’s been 40 years since the first students walked through the door, and the SVES Parent Teacher Association (PTA) felt it high time to celebrate. Last September, the PTA launched its 40th Anniversary Campaign, with a goal to raise $40,000 for the school. Antonia Blackwood, 40th Anniversary Campaign Chair, along with the PTA Board and many dedicated volunteers, ran several mini campaigns throughout the year. The PTA exceeded their goal, raising almost $50,000. “We are grateful for all the businesses and families who supported us. The teachers who auctioned off recreational experiences for their students was crucial to our success,” said Blackwood. “Also, we couldn’t have done this without the administration’s full support.”

During the 2018-2019 40th Anniversary Campaign, the SVES PTA Board focused on getting sponsorships from SVES alumni, families, and local businesses. To raise the remaining funds, the board coordinated an online auction and hosted a 40th Anniversary Celebration; selling tickets to the event that included a silent auction and raffle. To close out the campaign, Julie Hanssen Harris, Membership VP, sold bricks engraved with each donor’s name. The school plans to install the brick pathway in the front of the school later this year.

At the end of September, the SVES PTA will be hosting a 40th Birthday Celebration for SVES families, alumni, and sponsors. The free event will finish off a year-long fundraising campaign in honor of the school’s anniversary. There will be food, games, moon bounces, a DJ, and music performances by SVES students. “We will also be offering a 40th Anniversary T-shirt to each student so that every student feels a part of the SVES community,” added Blackwood. The school will also be unveiling a rock garden installation designed by the students.

“This event is going to be a wonderful celebration for not only the school, but the entire community. It’s great to see all these groups come together to celebrate the school and our accomplishments over the years. It is a testament of how supportive our community is, and how everyone works together to help the school. There is a lot of pride among our students and families,” said Kevin West, SVES Principal.