Paul Richards of California Guitar Trio: “Robert Fripp gave us many exercises to learn how to listen to each other and how to play well with the group.” 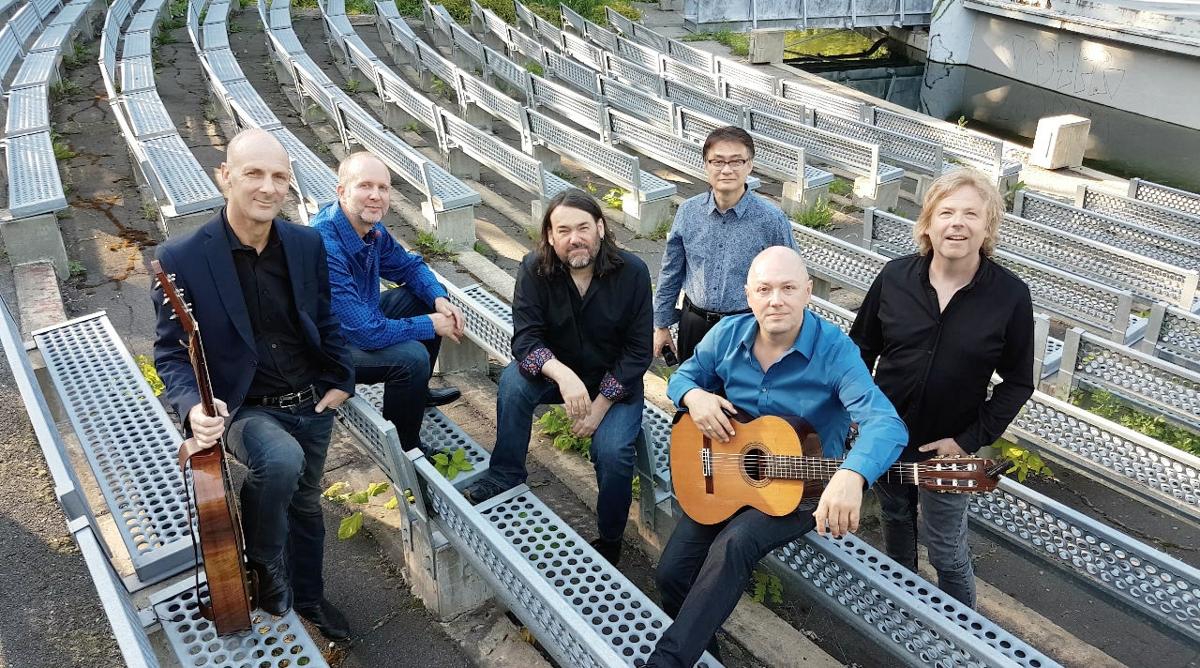 While California Guitar Trio (CGT) is described as “serious and precise,” Montreal Guitar Trio (MGT) is described as “emotional and passionate.” I can see why having them perform together makes for an interesting experience. They also use different instruments: While CGT plays the steel string acoustic guitar, MGT uses nylon string guitars. The combination of both instruments is an unusual one. CGT is composed of Bert Lams, Hideyo Moriya and Paul Richards, who represent three countries: Belgium, Japan and the USA. MGA represents Canada and includes: Sébastien Dufour, Glenn Lévesque and Marc Morin.

I had this conversation over the phone with Paul Richards:

I read that the three of you studied music in college and that you met when you enrolled in Robert Fripp's challenging Guitar Craft courses. What really made the three of you travel all the way to Britain to take this class?

Richards: So, Robert Fripp is one of the most innovative guitarists of our time now. If you are familiar at all with his work, he's the founder of a group called King Crimson, and he is also in the Rolling Stone magazine list for Top 100 Guitarists. He's number 42. He started teaching these Guitar Craft seminars in the mid '80s.

For me, I was studying privately at that time and also at the university, and my private teacher recommended to me to go to the Robert Fripp Guitar Craft courses. When I went to the Guitar Craft, it was so different and so wonderful for me. It was a big change from what I was doing at the university.

Richards: One of the main differences was, Robert Fripp gave us many exercises to learn how to listen to each other and how to play well with the group. There were also technical exercises, but a big focus on our work within Guitar Craft also has to do with self-awareness and being able to be aware of what I'm doing and how what I'm doing affects the others and listening to the other people in the group.

That was very different from what I was doing at the university. In the university, we were studying very important things like music theory and also very important stuff. But nobody ever taught me an exercise on how to listen to each other and so this was a big, key difference for us. For example, one exercise that we do is called “circulation.” … We take a melody and we each play one note in turn of the melody. We create the melody together with each of us taking every third note of the melody, so we play the notes in succession. In order to do this, we have to listen to each other to be able to play the note in the right place at the right time, in more of a deeper way to explain a normal piece of music. Of course, there's some basic listening in order to play music. We have to learn some basic listening skills. But to get really deep into it, there are some techniques available to us and Robert Fripp taught us these kinds of techniques.

How about the others? What took them all the way to him?

Richards: You know, each of us has a different story. Bert is from Belgium and he was studying classical music at that time. He's the real classical player of the three of us and he had a big classical music influence on the three of us. I know that he also heard about these Guitar Craft seminars from some musician friends of his in Belgium. I've heard him tell this story about how when he went to the first Robert Fripp Guitar Craft course, it was a big change for him. Hideyo Moriya is from Japan, and I think he was a big fan of King Crimson, which is the group Robert Fripp played in. I think he saw the advertisement in Guitar Magazine about the Guitar Craft course. So all three of us had a different story of how we arrived at the Guitar Craft course. Robert Fripp had a house in England where he invited some of the students to go and live together and work and study and play music together.

Richards: This is where the three of us started playing music together. It was at the Red Lion House in Cranborne, Dorset, England. We were there for about a year and a half studying music together and playing music, playing guitar all day and really, the foundation for what we're doing now comes a lot from that time in England together.

May I ask you, how much did it cost to take the course?

Richards: … This was back in the '80s when we first started, so we were all students. I was in my 20s back then. So at that time it was maybe around $900 per week for the initial course. But then when the courses got longer, the price per week went way down. So, the longer the commitment, the lower the price. But now I know that Robert Fripp is doing some guitar seminars coming up in 2020, and I think the price is going to be higher for that.

How old is he now?

Interesting. You said that Bert brought classical music to your trio; what about you and Hideyo?

Richards: My background is mostly in rock and blues and jazz and classic rock. When I was a teenager, I learned to play guitar initially at age 13 by playing along with albums from Led Zeppelin. Then as I got older, I started to expand my interest. When I was at university, I was in a jazz guitar ensemble, so I was studying jazz for several years. Then Hideyo Moriya from Japan, when he was a teenager, he was playing music from the surf rock groups like the Ventures. You know the Ventures?

I read about them.

Richards: Yes, yes. So in the '60s in Japan, the group called the Ventures was very popular, like the Beatles. They're an instrumental guitar group and the first songs that Hideyo learned to play on the guitar were these kinds of songs, which they now call surf rock.

Do you think this influenced your group?

Richards: This is a big influence of his on the group. But also, growing up in Japan, he had many other influences. For example, he has done several transcriptions of traditional Japanese music for our Guitar Trio and we've included that in our repertoire. Some Koto music that we —

How do you spell this?

Richards: Koto is K-O-T-O. It's a traditional Japanese instrument and he made some transcriptions for the California Guitar Trio … We have several pieces on different albums. He likes a lot of the English rock groups and, well, he has quite a variety.

All three of us like lots of different kinds of music. That was one of the things that drew us together initially back in 1991 when we formed the group. One of the things that we liked about each other is that we all like many different kinds of music. From the very beginning, we began to incorporate these different influences and different interests together, playing music that wouldn't normally be played on acoustic guitar. For example, with Bert Lams' classical background, we began doing some transcriptions of symphonic and organ music and choir music that normally never was played on the guitar. So that was quite interesting for us to find music that worked well with Guitar Trio, but wasn't normally music that's played on the guitar.

But, you know, I still feel that there must have been magic that connected the three of you, other than just your interests. You know what I mean? Because I'm sure there are so many students who attended this course, but not many of them became a trio.

Can you describe this magic?

Richards:  A lot of this had to do with the friendship that we had formed between the three of us. There were many people that were coming to the Guitar Craft courses, but there was something about the friendship that we formed, the three of us. The three of us are very different people, but somehow we became friends early on. So even when we had a day off, the three of us were going to do things together. This friendship is one of the things that has helped us last for 28 years now because we get along very well. You know, you hear about these groups that dislike each other and break up. We've never had these kinds of problems because we respect each other.

And I think all three of us are fairly even-tempered people. I mean, when things go wrong, none of us get really mad or are really angry. It's those kinds of basic things that help. The music is certainly the most important thing, but underneath the music, there needs to be something more to help us continue to work together … this friendship. Look, I'm living in LA now, but I'm originally from Utah. So, it was one guy from Belgium, one from Japan and one guy from the USA that normally would never get together. But you used the word magic and I think there is something magical, a magical combination between the friendship and the music.